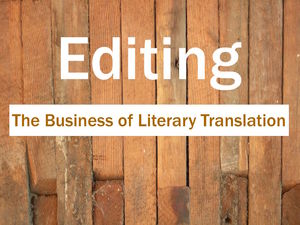 The Business of Literary Translation: A Four-Part Series

Literary translation — as an art, a profession, and a presence in the publishing industry — has come a long way in the past decade. In this four-part event, co-presented by the Bridge Series and the PEN America Translation Committee, translators, editors, publishers, and booksellers hone in on four aspects of the business of literary translation, discussing what’s changed and what hasn’t, for better and for worse.

How do you edit a translation? What do you need to know, or not know? How do you deal sensitively and appropriately with a text written in another language, and the writer, translator, foreign editor, and other parties who might have had a hand in creating it? Four experienced editors discuss the pleasures and puzzles of working on translations, from dealing with cultural differences to handling “translationese.”

Sal Robinson has been an editor for international literature at Houghton Mifflin Harcourt and Melville House. With Bill Martin and Monika Zaleska, she runs the Bridge.

Lexy Bloom is Senior Editor at Vintage and Anchor Books and Senior Culinary Editor at Alfred A. Knopf, imprints of the Knopf Doubleday Publishing Group at Penguin Random House, Inc. She edits both fiction and nonfiction, focusing on works in translation and voices from around the world; as well as food writing and cookbooks. She has edited the work of award-winning and bestselling authors such as Haruki Murakami, Deb Perelman, Hanan al-Shaykh, Madhur Jaffrey, Mia Alvar, Alex Prud’homme, Chimamanda Ngozi Adichie and many others for Knopf, Pantheon and Vintage/Anchor. She has overseen the publications of the works of Irène Némirovsky, author of Suite Française, as well as the paperback editions of writers such as Claire Messud, Jhumpa Lahiri, Jennifer Egan, Hanya Yanagihara, and Abraham Verghese.

Jeremy M. Davies was for some years Senior Editor at Dalkey Archive Press. He is the author of two novels, Rose Alley (2009) and Fancy (2015), as well as The Knack of Doing, a collection of short fiction forthcoming in March from David R. Godine.