In acts of heroic resistance against constant vilification and virtual attacks, writers Anita Sarkeesian, Yassmin Abdel-Magied, and Porochista Khakpour refused to be silenced by vitriolic internet haters. They shared their experiences with online hate and discussed how best to counter it to make the internet a more inclusive place for all. Moderated by Katy Glenn Bass.

This program marked the launch of PEN America’s Online Harassment Field Manual for writers and journalists. 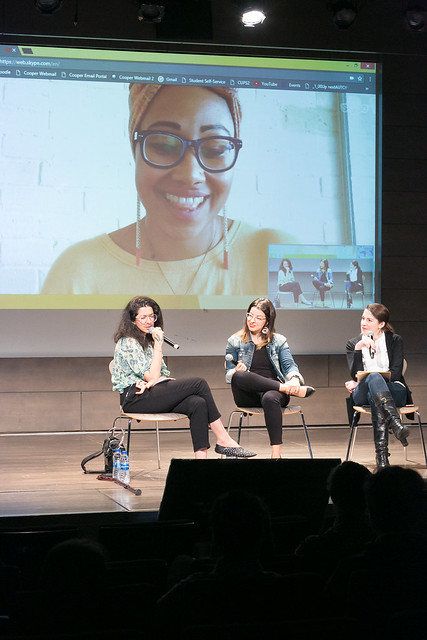 Katy Glenn Bass is the director of PEN America’s Free Expression Policy and Research. She focuses on free expression in the U.S., China, and PEN’s other core focus countries, and supervises the production of PEN’s reports analyzing issues that affect free expression around the world.

Porochista Khakpour’s debut novel Sons and Other Flammable Objects was a New York Times Editor’s Choice, one of the Chicago Tribune’s Fall’s Best, and the 2007 California Book Award winner in the “First Fiction” category. Her second novel The Last Illusion was a 2014 “Best Book of the Year” according to NPR, Kirkus, Buzzfeed, Popmatters, Electric Literature, and many more. Among her many fellowships is a National Endowment for the Arts award. Her nonfiction has appeared in many sections of The New York Times, the Los Angeles Times, Elle, Slate, Salon, and Bookforum, among many others. Currently, she is guest faculty at VCFA and Stonecoast’s MFA programs as well as a contributing editor at The Evergreen Review. Born in Tehran and raised in the Los Angeles area, she lives in New York City’s Harlem.

Yassmin Abdel-Magied is a mechanical engineer, writer, broadcaster, and award-winning social advocate. She founded “Youth Without Borders” at the age of 16, worked on offshore oil rigs, then published her first book at 24.

Anita Sarkeesian is an award-winning media critic and the creator and executive director of Feminist Frequency, an educational nonprofit that explores representations in pop culture narratives. Her work focuses on deconstructing the stereotypes and tropes associated with women in popular culture, as well as highlighting issues surrounding the targeted harassment of marginalized people in online and gaming spaces.