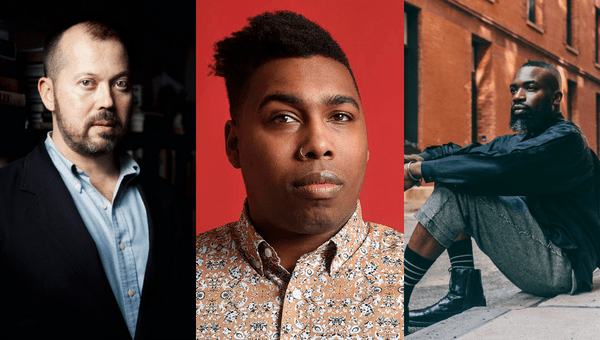 Celebrate the summer with readings from Alexander Chee and Darnell Moore, authors of a piercing and intimate essay collection and memoir that illuminate their lives as authors and activists. After sharing selections from How to Write an Autobiographical Novel and No Ashes in the Fire: Coming of Age Black and Free in America, the authors will be joined by poet Saeed Jones to discuss the ways in which their work explores the intersection of race and sexuality, and navigates truth and fiction in their own lives. The evening culminates with a book signing.

Alexander Chee is the author of the novels Edinburgh, The Queen of the Night, and the essay collection How To Write An Autobiographical Novel. He is a contributing editor at The New Republic, and an editor at large at VQR. His essays and stories have appeared in The New York Times Book Review, T Magazine, Tin House, Slate, Guernica, and Out, among others. He is winner of a 2003 Whiting Award, a 2004 NEA Fellowship in prose and a 2010 MCCA Fellowship, and residency fellowships from the MacDowell Colony, the VCCA, Civitella Ranieri and Amtrak. He is an associate professor of English and Creative Writing at Dartmouth College.

Darnell Moore is an editor-at-large at CASSIUS (iOne Digital), a columnist at LogoTV.com and NewNowNext.com, and a contributor at Mic, where he hosted their widely viewed digital series, The Movement. He writes regularly for Ebony, Advocate, Vice, and Guardian. Moore is a writer-in-residence at the Center of African American Religion, Sexual Politics, and Social Justice at Columbia University, has taught at NYU, Rutgers, Fordham, and Vassar, and was trained at Princeton Theological Seminary. In 2016, he was named one of The Root 100, and in 2015 he was named one of Ebony magazine’s Power 100 and Planned Parenthood’s 99 Dream Keepers. He divides his time between Brooklyn and Atlanta.

Saeed Jones‘ debut poetry collection Prelude To Bruise (Coffee House Press) was the winner of the 2015 PEN/Joyce Osterweil Award For Poetry and the 2015 Stonewall Book Award/Barbara Gittings Literature Award, and a finalist for the 2015 National Book Critics Circle Award. The collection was also a finalist for 2015 awards from the Lambda Literary and the Publishing Triangle. Mr. Jones also won a Pushcart Prize for poetry in 2013 and 2016. His poetry and essays have appeared in The New York Times, NPR, and Best American Poetry, among others. The Advocate Magazine recently named him as one of the “50 Most Influential LGBT People in Media.” His memoir, How We Fight For Our Lives, is forthcoming from Simon & Schuster in 2018.