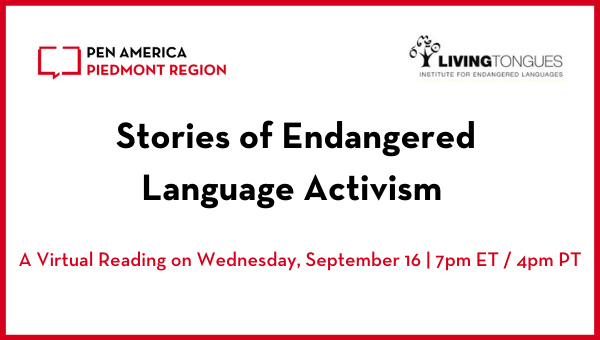 There are between 150 and 170 endangered languages spoken in the United States, and many of them only have a small number of speakers left, making the current moment a pivotal time for language documentation. Last speakers are an important part of their community’s identity, heritage, and survival, and there’s much at stake if these languages are lost.

Margaret Noodin is a professor of English and American Indian studies at the University of Wisconsin–Milwaukee, where she also serves as the associate dean of the Humanities and director of the Electa Quinney Institute for American Indian Education. She is the author of Bawaajimo: A Dialect of Dreams in Anishinaabe Language and Literature, Weweni and What the Chickadee Knows (Wayne State University Press), which are both bilingual collections of poetry in Anishinaabemowin and English.

Felipe H. Lopez is a postdoctoral scholar in Community Engaged Digital Scholarship at Haverford College. He is originally from the Zapotec town of San Lucas Quiaviní, Oaxaca. At the age of 16 he migrated to Los Angeles, speaking no English and little Spanish. By 2007, he had earned his Ph.D. from UCLA in urban planning, with research focusing on Mexican indigenous issues on both sides of the border. He is co-author of a trilingual Zapotec-Spanish-English dictionary (Munro & Lopez et al., 1999) and has taught Zapotec language classes at UCLA and UCSD using a textbook which he also co-authored (Munro et al., 2008). His Zapotec poetry can be found in the Latin American Literary Review, The Acentos Review, and Latin American Literature Today. His Zapotec short story “Liaza chaa” (“I am going home”) was awarded the 2017 Premios CaSa prize, an annual competition for the creation of literature in Zapotec, and was published in Latin American Literature Today.

Teneia Blue Feather of the Skarure Woccon community, reflects her passions as Cultural Advocate and Language Activist through Song Writing. Her vastly diverse background and natural creativity are the tools she hopes will bring back her ancestors’ voices. Skarure Woccon of the Cape Fear is a Pre Colonial Tribal Nation with a long, rich history concentrated in and around Brunswick, Bladen, Columbus and Pender Counties of the Cape Fear Region of North Carolina.

Lovell Pierce, also known as Chief Lovell Eagle Elk, is an author, Massage Practitioner, 5th degree Black Belt, Fitness Trainer and principal Chief of the Skarure Woccon of the Cape Fear. His skills include teaching survival, combat and natural medicine. Tuscarora Elder and Seer, Ted SilverHand, gave Eagle Elk his name because of his spiritual vision, lofty message, leadership and ability to use his body in martial arts. Lovell is currently in Law Enforcement School and he trains officers in Combatives.

David Harrison is a linguist and National Geographic Explorer, documenting endangered languages and cultures around the world. He has done extensive fieldwork with indigenous communities in locations including Siberia, Bolivia, India, and Vanuatu. He co-starred in the acclaimed documentary film The Linguists, and his work has been featured in numerous publications including The New York Times, USA Today, and Science. David is Professor of linguistics at Swarthmore College, a fellow of the Explorers’ Club, and Director of Research for the Living Tongues Institute for Endangered Languages.

Anna Luisa Daigneault is a linguistic anthropologist, artist and writer. She is the Program Director for Living Tongues Institute for Endangered Languages, where she coordinates documentation projects that protect the world’s linguistic diversity. Daigneault has conducted ethnolinguistic fieldwork throughout the Americas and in the Pacific Islands, and has contributed to the publication of many Talking Dictionaries for endangered and minority languages. Her works have been published by The Dominion, Global Voices, SAPIENS, and she has presented at TEDxGreensboro.

Deonna Kelli Sayed is a writer-performer based in Greensboro, North Carolina. Sayed’s essays and short stories are included in Love, Inshallah: The Secret Love Lives of American Muslim Women; Faithfully Feminist: Jewish, Christian and Muslim Feminists on Why We Stay; and Everywhere Stories: Short Fiction From a Small Planet, Volume III. She is the author of Paranormal Obsession: America’s Fascination with Ghosts & Hauntings, Spooks & Spirits and a TEDx speaker. Her personal essays appear online, including at The Dirty Spoon and Jennifer Pastiloff’s The Manifest-Station. Sayed is an award-winning multimedia journalist for her podcast series at Yes! Weekly, an independent newspaper, featuring LGBTQ issues in North Carolina.