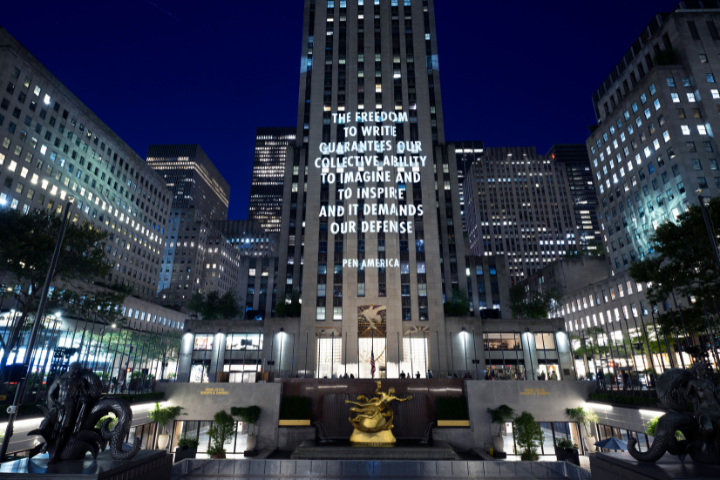 On five nights in September, the renowned artist Jenny Holzer will celebrate PEN America’s century-long defense of the written word and the fundamental rights that make free expression possible with a powerful new series of light projections that will illuminate three buildings in Manhattan’s iconic Rockefeller Center.

Starting after sunset at 8pm on Wednesday, September 14, and continuing until 10pm each evening through Sunday, September 18, the facades of 30 Rockefeller Plaza and 610 and 620 Fifth Avenue will be lit with selected passages from gifted writers and artists who have supported PEN America’s vital work to protect free expression.

The outdoor installation, titled SPEECH ITSELF, will include quotes from more than 60 authors in a visual tribute to the cherished freedoms to write, read, and speak. Among those whose words will be projected are Ayad Akhtar, Kwame Anthony Appiah, Margaret Atwood, Ron Chernow, Henry Louis Gates Jr., J.K. Rowling, Joy Harjo, Jhumpa Lahiri, Yoon Ha Lee, Toni Morrison, Alejandro Zambra, and Nadya Tolokonnikova of the performance art group Pussy Riot.

Holzer stated: “PEN America’s extraordinary commitment to the written and spoken word, and to standing for open expression worldwide, inspires. PEN’s work to protect ‘some rawness’ – to borrow from Colm Tóibín – supports the purpose of language in public spaces. I am delighted and honored to collaborate with PEN on an installation that lights its significant century-long dedication to the freedoms to think, to write, and to speak.” 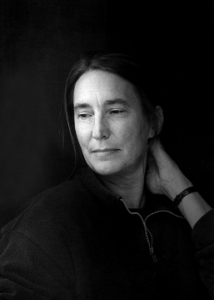 Jenny Holzer has presented her astringent ideas, arguments, and sorrows in public places and international exhibitions, including the Venice Biennale, the Guggenheim Museums in New York and Bilbao, the Whitney Museum of American Art, and the Louvre Abu Dhabi. Her medium, whether a T-shirt, plaque, or LED sign, is writing, and the public dimension is integral to her work. Starting in the 1970s with her New York City street posters and continuing through her light projections on landscape and architecture, her practice has rivaled ignorance and violence with humor and kindness.