Six Words for My Mother 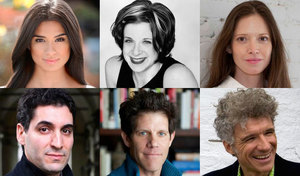 Expressions of love between a mother and child can take the form of a drawing on the refrigerator, a surprise kiss in the morning, or a bed that was made without asking. For this Mother’s Day event, storytellers perform a Six-Word Memoir, then reveal the backstory. At the show’s end, audience members share their six-word stories in the playful “circus” environment of Elizabeth Streb’s STREB Lab for Action Mechanics.

Professors at public universities have no right to #FreedomOfSpeech when they teach, say lawyers for the State of Florida.

Many academics describe Florida’s stance as a direct, troubling attack on #academicfreedom. Some have even called it fascist. https://www.chronicle.com/article/its-not-clear-whether-public-college-professors-have-first-amendment-rights-when-theyre-teaching

Some people hate Banned books week so much they're not only banning it in schools but calling police on it in libraries. https://www.foxcarolina.com/2022/09/27/police-called-library-investigate-obscene-material/

Notice that there is at least an entire generation of high school students who can't even have these books considered as part of their educational opportunities. Not at all. 5 years. And that's if school administration doesn't feel silenced to even ask. https://twitter.com/jonfreadom/status/1575111942586667008