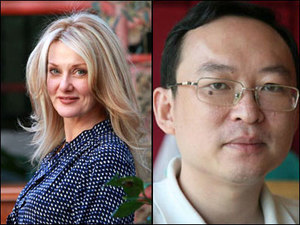 PEN America’s Larry Siems will moderate a conversation between Yu Jie and Anna Funder before a screening of Silence or Exile.

Silence or Exile tells the stories of the lives and work of five exiled writers who, in their pursuit of freedom of expression, have been forced to escape their home countries. The writers portrayed are: Philo Ikonya (Kenya/Oslo), Mana Neyestani (Iran/Paris), Horacio Castellanos-Moya (El Salvador/Iowa City), Svetlana Alexievitch (Belarus/Berlin), and Ma Jian (China/London).

Yu Jie is the recipient of the 2012 Civil Courage Prize. He is known as one of China’s most prominent essayists and critics. Following severe harassment and persecution he fled to the US with his family in January 2012. From his new point of exile, he sees “his lifelong goal as achieving democracy and freedom in China.”

Anna Funder explores, in her acclaimed novel All that I Am, the destinies of persecuted writers and intellectuals in the Weimar Era and during World War II. From that perspective, she will draw the lines up to our age, asking how solidarity and hospitality can be mobilized for persecuted writers of today.

The event is organized by ICORN, the International Cities of Refuge Network and its Shahrazad stories for life program, in close cooperation with PEN American Center and the Scandinavia House.