Seeing Beyond Satire and Stereotypes 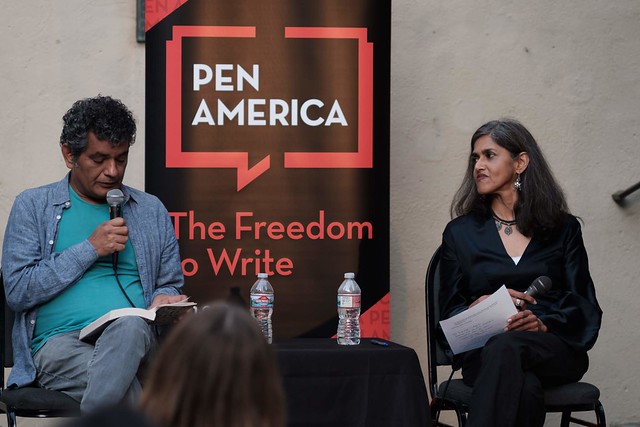 Join authors Mohammed Hanif (Red Birds, A Case of Exploding Mangoes) and Sehba Sarwar in conversation on the opportunities for revealing and withholding in South Asian literature. A question-and-answer session with the audience and book signing will follow with Vroman’s Bookstore. Light refreshments will be provided and a prayer room made available.

This event is presented in partnership with the USC Pacific Asia Museum Pakistani Arts Council and the South Asian Network. It is one of the 2019 PEN America World Voices Festival Los Angeles events.

Mohammed Hanif was born in Okara, Pakistan. He graduated from the Pakistan Air Force Academy as pilot officer but subsequently left to pursue a career in journalism. His first novel, A Case of Exploding Mangoes, was longlisted for the Man Booker Prize, shortlisted for The Guardian First Book Award, and won the Commonwealth Writers’ Prize for Best First Novel. His second novel, Our Lady of Alice Bhatti, was shortlisted for the 2012 Wellcome Book Prize. His third novel, Red Birds, was released last year to much critical acclaim. He has written the libretto for a new opera and writes regularly for The New York Times, BBC Urdu, and BBC Punjabi. He currently splits his time between Berlin and Karachi.

Award-winning writer, artist, and educator Sehba Sarwar creates essays, stories, poems, and art that tackle displacement, migration, and women’s issues. Her writings have appeared in publications including New York Times Sunday Magazine, Vallum, Aleph, Asia: Magazine of Asian Literature, Creative Time Reports, and elsewhere. Her short stories have appeared in anthologies including And the World Changed (Feminist Press), Houston Noir (Akashic Books), and Neither Night, Nor Day: 13 Stories by Pakistani Women (Harper Collins India), while the second edition of her novel, Black Wings, was released in 2019 through Veliz Books. Born and raised in Karachi, Pakistan, in a home filled with artists and activists, Sarwar is based in Los Angeles, California, where she writes, teaches, and creates art.