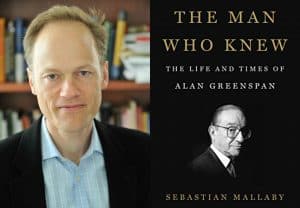 You are invited to a private dinner with journalist and author Sebastian Mallaby.

The dinner will be hosted by Jeanmarie and Billy Fenrich on Tuesday, January 31st at 6:30pm in their West Village home.

Sebastian will discuss his new biography, The Man Who Knew: The Life and Times of Alan Greenspan. This book is the product of over five years of research based on untrammeled access to Alan Greenspan and his closest professional and personal intimates. Foreign Affairs praises it as a “masterful biography—which doubles as an excellent economic history of the past three decades—[and] tells a story of Greenspan’s technocratic ascent, from his modest boyhood in New York City, to a young adulthood colored by his philosophical attraction to the anti-government libertarianism of the novelist Ayn Rand, to his career as a high-flying economic consultant, and finally to his rise to the pinnacle of power at the Fed.”

Sebastian Mallaby has been a Washington Post columnist since 1999. From 1986 to 1999, he was on the staff of The Economist, serving in Zimbabwe, London, and Japan, and as the magazine’s Washington bureau chief. He spent 2003 as a Fellow at the Council on Foreign Relations and has written for Foreign Affairs, Foreign Policy, The New York Times, and The New Republic, among others.