Reporting, Homelessness, and the Public Sphere: An Interactive Community Discussion 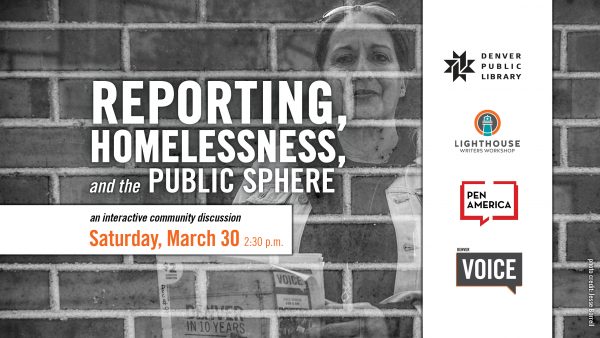 PEN America, the Denver VOICE, Denver Public Library, and Lighthouse Writers Workshop are hosting a panel on Saturday, March 30 at 2:30pm at Park Hill Branch Library to discuss the roles and responsibilities of local journalists, media outlets, and the public library in calling attention to homelessness and the ethics of that work. The program will begin with interactive brainstorming followed by a panel of reporters and writers answering questions. There will be time for Q&A with local writers, reporters, and community members with experience in homelessness, and participants will depart with action steps they can take based on our conversation.

Donna Bryson is a Denver-based author and journalist with international experience. She’s currently writing about housing and hunger for denverite.com, an online news magazine covering metro Denver. Her new book, Home of the Brave, recounts how a small American town took on the big challenge of helping military veterans reintegrate into civilian life. Bryson is also the author of It’s a Black White Thing, which explores racial attitudes amongst young South Africans and won first place in the nonfiction book category of the National Federation of Press Women’s 2015 Communications Contest.

S.E. Fleenor writes novels and articles centering on feminism, queer identities, pop culture, and literature and has appeared in several publications, including Vice, Electric Literature, them.us, and Upworthy. Fleenor is a staff writer with SYFY WIRE’s feminist vertical, FANGRRLS, and a contributing writer with the Denver VOICE. Outside of writing, Fleenor is a nonprofit consultant and editor, having received a master of theological studies from Harvard University. Fleenor digs comic books, Star Trek, Wynonna Earp, and is enjoying a long tumble down the rabbit hole of fantasy. Learn more at: sefleenor.com

Pete Simon is a Navy veteran (1968–1970), who served on a Destroyer that took him to Africa, India, Pakistan, The Persian Gulf, and Red Sea. His first job in radio was at a country music station in Atlantic City, NJ, in 1973, before attending the University of Delaware, where he worked with a small group of students to start WXDR-FM in 1976. He worked at public radio stations as a News Producer and Manager from 1979 until 1997; beginning at WHYY-FM in Philadelphia (1979–1981); then KCSU, Fort Collins (1981–1989); KPRN/Colorado Public Radio, Grand Junction (1989–1996); and KVNF, Paonia (1996-97). He has been a volunteer music announcer at KUVO in Denver since 1998. From 1998 until 2017 Pete worked at the U.S. Department of Energy’s Golden Field Office for Energy Efficiency and Renewable Energy in the Office of Financial Assistance as a Grants Management Specialist, with special details in public relations work. He serves on the Board of the Arvada Arts and Culture Commission and is an avid gardener. He is becoming familiar with his digital recorder and will be using it to record interviews with veterans and homeless people. Eventually he wants to produce the interviews for segments on a website he wants to create which deals with the homeless, veterans, and other issues.

Sarah Ford is a Denver-based journalist and advocate who has covered local issues of homelessness and poverty for over eight years with the Denver VOICE. After receiving her degree in journalism from the University of Denver, Ford dabbled in mainstream media as a writer/producer with CBS Denver before following her passion and moving into her current role as managing editor at the VOICE. When she is not working at the VOICE, you can find Ford cheering on the Rockies in Section 117.

Sonia Falcón is a Community Resource Specialist with the Denver Public Library. She works to connect library customers to resources and supportive services related to emergency shelter, mental heath, housing, food, education, employment, legal services, and more at 11 branch locations throughout the east side of Denver. Her work also involves partnering with local agencies and service providers to improve resources and to advocate for social change on behalf of marginalized populations in Denver. Sonia received her Master’s in Social Work from the University of Washington, and over the last 13 years has worked with youth, individuals, and families in community mental health, foster care, and higher education settings. She is now overjoyed to find herself working for the public library. Her hometown public library in New Mexico was often a place of refuge and restoration for her while growing up, and she feels privileged to partner with library staff in creating a welcoming and supportive place for all at DPL.

John Alexander has been vending papers with the Denver VOICE for 11 years. Prior to joining the VOICE, Alexander struggled with a drug addiction and homelessness. Thanks to God, he is now one of the VOICE’s top-selling vendors, a published writer, and a public speaker.