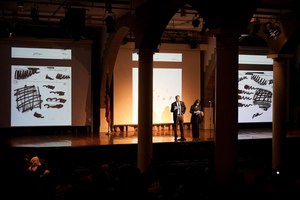 Co-sponsored with ACLU and the Film Society of Lincoln Center

“Reckoning With Torture: Memos and Testimonies From the ‘War on Terror,’” an evening of readings from formerly secret government documents detailing the scope and human cost of the United States’ post-9/11 torture program

Acclaimed director Doug Liman (The Bourne Identity, Mr. and Mrs. Smith, Fair Game) directs this performance of “Reckoning” for the stage and is filming the event for a future documentary. Celebrated writers including Russell Banks, Peter Godwin, Beth Gutcheon, Rula Jebreal, Dahlia Lithwick, John Buffalo Mailer, and Kati Marton join actors Lili Taylor and Dianne Wiest, along with former CIA case officer Jack Rice and former military prosecutor Col. Morris Davis for readings from formerly secret government documents detailing the scope and disastrous human cost of the U.S. torture program. The artist Jenny Holzer, whose work was the subject of a retrospective at the Whitney Museum of American Art in 2009, has created original artwork for the “Reckoning” project.

The “Reckoning” project and event series aims to shed a light on the scope and human cost of the post-9/11 torture program by combining documentary evidence of the torture program with video testimonials from former Guantánamo detainees who suffered abuse. The ACLU and PEN have been staging “Reckoning With Torture” events around the country for the past two years, most recently at the Sundance Film Festival. These performance/installation events are part of a national performance and film project that aims to build support for accountability for torture.

More information about the “Reckoning With Torture” project is online at: www.reckoningwithtorture.org