Race in the Public Dialogue: Hate Speech and Free Speech in America Today 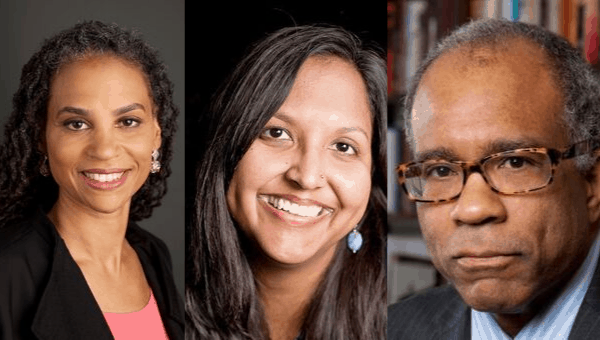 Join Randall L. Kennedy (Michael R. Klein Professor at Harvard Law School), Maya Wiley (Henry Cohen Professor of Public and Urban Policy at The New School’s Milano School of Policy, Management, and Environment), and Nina McConigley (Assistant Professor at the University of Wyoming, Fiction Writer, and PEN Open Book award winner) in a discussion moderated by Dru Menaker (Chief Operating Officer, PEN America) on the state of free speech in a political and cultural climate of deep divisions and heightened polarization. Has hate speech become ubiquitous as hate crimes are on the rise? Must free speech be at odds with anti-racism and inclusion? How do we protect the right to freely express and debate opposing views when Americans are more and more divided? How do we (re)build a common ground?

The Public Dialogue Series on Freedom, Justice, and Race presented by PEN America and the Boston Museum of African American History is made possible by the James M. and Cathleen D. Stone Foundation.

Randall L. Kennedy is Michael R. Klein Professor at Harvard Law School, where he teaches courses on contracts, criminal law, and the regulation of race relations. He was born in Columbia, South Carolina. For his education, he attended St. Albans School, Princeton University, Oxford University, and Yale Law School. He served as a law clerk for Judge J. Skelly Wright of the United States Court of Appeals and for Justice Thurgood Marshall of the United States Supreme Court. He is a member of the bar of the District of Columbia and the Supreme Court of the United States. Awarded the 1998 Robert F. Kennedy Book Award for Race, Crime, and the Law, Mr. Kennedy writes for a wide range of scholarly and general interest publications.

Maya Wiley is a professor at The New School. A nationally renowned expert on racial justice and equity, she founded and co-directs The New School’s Digital Equity Laboratory. Maya is also a legal analyst for NBC News and MSNBC, and a frequent contributor to outlets including Time Magazine, The Guardian, and Essence.com. As prior counsel to New York City Mayor Bill DeBlasio and a member of his senior cabinet, Ms. Wiley was placed at the helm of the mayor’s commitment to expand affordable broadband access, advance civil and human rights and gender equity, and support minority/women owned business enterprises. Ms. Wiley holds a J.D. from Columbia University School of Law and a B.A in psychology from Dartmouth College.

Nina McConigley is a fiction writer and an assistant professor at the University of Wyoming. She is the author of the story collection Cowboys and East Indians, which won a 2014 PEN Open Book Award. She was born in Singapore and grew up in Wyoming. She holds an MFA in Creative Writing from the University of Houston, where she was an Inprint Brown Foundation Fellow. She also holds an MA in English from the University of Wyoming and a BA in literature from Saint Olaf College. She currently serves on the board of the Wyoming Arts Council. She is at work on a new novel.

Dru Menaker is a committed advocate for free expression as a fundamental right that underpins democratic, economic, and social development. She has spent the last 13 years strengthening media sectors and advancing access to information in closed, transitioning, and conflict-affected countries worldwide. Most recently, Menaker was the Senior Media Advisor for IREX, an international nonprofit organization specializing in improving media sectors, promoting civil society, and expanding technology use. Before joining IREX, Menaker was a journalist, editor, and media manager. As a foreign correspondent, she had postings in Warsaw, Johannesburg, Cairo, and Moscow. In the United States, she was a reporter, editor, and bureau chief for The Associated Press.