[VIRTUAL] Publishers and Activists: An Interdisciplinary Dialogue on Racial Justice 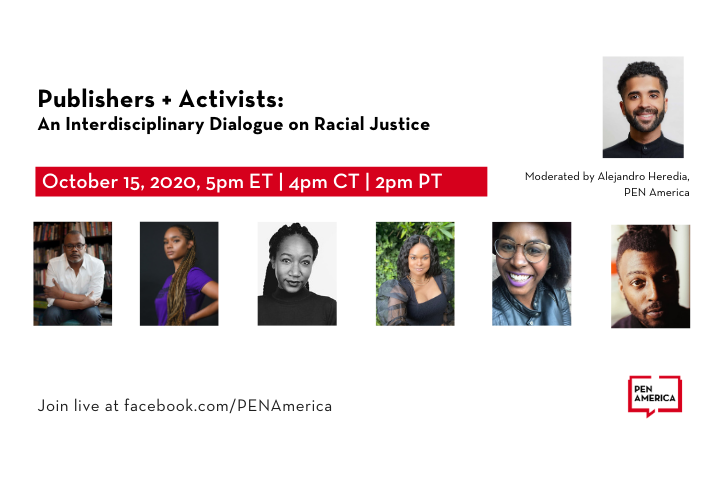 In partnership with the NYC Literary Action Coalition, PEN America is excited to host a conversation featuring publishing professionals and activists as they discuss the current movement for racial justice on Thursday, October 15 at 5pm ET.

Publishing professionals Chris Jackson at Oneworld, Patrice Caldwell at People of Color in Publishing, and Zakia Henderson-Brown at The New Press will discuss how the rise in national protests affects their work in the publishing industry. Additionally, activists Raquel Willis, Jamel Mims, and Nialah Edari will discuss their experiences at the forefront of the movement.

They will explore what racial justice means in 2020 in their respective fields of work, and the intersection between literature and activism to highlight where their work meets. The roundtable will be moderated by PEN America Community Outreach Manager Alejandro Heredia.

This event will be live on PEN America’s Facebook page.

Chris Jackson is the publisher and editor-in-chief of One World, a newly relaunched imprint of Random House. He’s the editor of a wide range of award-winning and bestselling authors, including Bryan Stevenson, Ta-Nehisi Coates, Jill Leovy, Trevor Noah, Nikole Hannah-Jones, Ibram X. Kendi, Valarie Kaur, and Eddie Huang. His own writing has appeared in The Paris Review, Callalloo, The Atlantic, and other outlets. He lives in New York.

is a graduate of Wellesley College and the founder of People of Color in Publishing—a grassroots organization dedicated to supporting, empowering, and uplifting racially and ethnically marginalized members of the book publishing industry. Born and raised in Texas, Caldwell was a children’s book editor before becoming a literary agent. She’s been named a Publishers Weekly Star Watch honoree and featured on Bustle’s inaugural “Lit List” as one of ten women changing the book world.

currently serves as editor and strategic partnerships coordinator at the nonprofit, mission-based publisher The New Press. She has edited such titles as Inventing Latinos, Prison by Any Other Name, Rap on Trial, People Like Us, State of Resistance, In a Day’s Work (which was a finalist for the 2019 Pulitzer Prize), and others. Henderson-Brown is the author of What Kind of Omen Am I, winner of the 2017 Poetry Society of America Chapbook Fellowship, selected by Cate Marvin. She is a Cave Canem graduate fellow, was a Poets House Emerging Poets fellow, and has received additional fellowships and support from the Fine Arts Work Center and the Squaw Valley Community of Writers. She has been in residence at the T.S. Eliot House, the Vermont Studio Center, and the Louis Armstrong House Museum, and lives in her native Brooklyn.

Raquel Willis is a Black transgender activist, award-winning writer, and media strategist dedicated to elevating the dignity of marginalized people, particularly Black transgender people. She is the director of communications at the Ms. Foundation. She is the former executive editor of Out Magazine and a former national organizer for Transgender Law Center (TLC). In 2018, she founded Black Trans Circles, a project of TLC, focused on developing the leadership of Black trans women in the South and Midwest by creating healing justice spaces to work through oppression-based trauma and incubating community organizing efforts to address anti-trans murder and violence.

Nialah Edari is the cofounder of Freedom March NYC, a youth protest and policy group on the front line pushing for reform in New York City and nationally. Hailing from Milwaukee, Wisconsin, Nialah moved to New York to study at Barnard College of Columbia University. Edari has been involved in activism from an early age, having served in the role of Midwest youth director for renowned national civil rights organization The National Action Network, and involved in gun violence prevention work in New York City. Edari has had the privilege of speaking on youth activism during the National Action Network’s annual conference, Yale’s Black Solidarity Conference, and the Black Women’s Roundtable.

Jamel Mims Jamel Mims is an African-American bilingual chinese rapper, multimedia artist and revolutionary. Also known as MC Tingbudong, he was awarded a Fulbright Scholarship to study hip hop in China in 2008 – an experience which almost never occurred, when the scholarship was jeopardized following an arrest and incident of police brutality. This led him to take an active stance in the fight against mass incarceration: he organized a campaign of nonviolent civil disobedience protests to end NYC’s “Stop and Frisk” policy with the Stop Mass Incarceration Network in 2011, and is currently organizing daily protests to drive out the Trump/Pence regime with Refuse Fascism and the NYC Revolution Club. His art combines interactive technology, language, music and radical politics to create immersive experiences, such as “Qi Lai (起来),” a remix of Paul Robeson’s 1930’s Chinese national anthem, and “Runaway” a glitched-out virtual reality trip through China’s modern day underground hip hop scene. Recently awarded the USC Annenberg Civic Media Fellowship supported by Macarthur Foundation, and recognized as a “Protest Leader Taking On The Establishment” by the New York Times, his work has been featured in i_D, Variety, VICE, XXL, The Nation and more.

Linfield University Fires Professor Who Spoke Out Against Sexual Misconduct

"It’s still not easy to discover the gems out there because of uneven or negligible media coverage." This #APAHeritageMonth, revisit our #PENTen interview with @jennybhatt about what inspired her to begin the @DesiBooks podcast & more. https://bit.ly/3xMZlHf

Facebook is obligated to respond to the @OversightBoard’s recommendations publicly. It should go beyond that, and we must hold it accountable for meaningful and transparent action. Our analysis of today's decision. https://bit.ly/3eTUyeB

A tenured professor in Oregon fired without cause. Administrators seem to be taking drastic steps to curtail free expression on the Linfield campus. https://bit.ly/2SlvvcE