Race in the Public Dialogue: The Power and Presence of Women in the Civil War 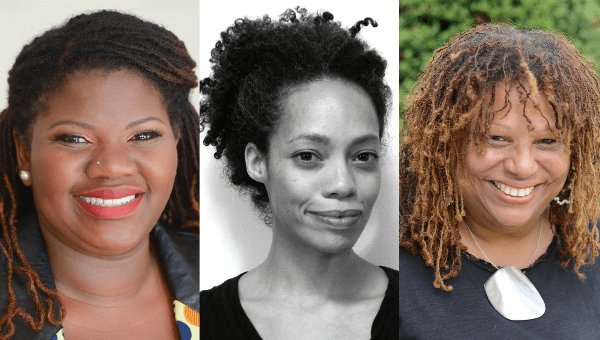 In partnership with Mass Humanities and The Museum of African American History, PEN America presents a program honoring Robert Gould Shaw and the Massachusetts 54th Regiment. July 18th is the anniversary date of the 54th’s first major battle at Fort Wagner, South Carolina: a celebrated historical event of the Civil War. Author Nicole Terez Dutton and Dr. Kellie Jackson, Assistant Professor, Wellesley College, join the Museum’s Director of Education, L’Merchie Frazier, for a discussion on the role of Harriett Tubman and Charlotte Forten, and the power and presence of women in the civil war.

The Public Dialogue Series on Freedom, Justice, and Race presented by PEN America and the Boston Museum of African American History is made possible by the James M. and Cathleen D. Stone Foundation.

Nicole Terez Dutton‘s work has appeared in Callaloo, Ploughshares, 32 Poems, Indiana Review and Salt Hill Journal. Nicole earned an MFA from Brown University and has received fellowships from the Frost Place, the Fine Arts Work Center, Bread Loaf Writers’ Conference, and the Virginia Center for the Creative Arts. Her collection of poems, If One Of Us Should Fall, was selected as the winner of the 2011 Cave Canem Poetry Prize. She lives in Somerville, Massachusetts where she served as the city’s inaugural poet laureate. She teaches in the Solstice Low-Residency MFA Program and is an editor at The Baffler and Transition Magazine.

Kellie Carter Jackson is a 19th century historian in the Department of Africana Studies. Her upcoming book, Force & Freedom: Black Abolitionists and the Politics of Violence (University of Pennsylvania Press), examines the conditions that led some black abolitionists to believe slavery might only be abolished by violent force. Carter Jackson is co-editor of Reconsidering Roots: Race, Politics, & Memory (Athens: University of Georgia Press). Carter Jackson’s essays have been featured in The Atlantic, Transition Magazine, The Conversation, Boston’s NPR Blog Cognoscenti, AAIHS’s Black Perspectives blog, and Quartz, where her article was named one of the top 13 essays of 2014. She has also been interviewed for The New York Times, Al Jazeera International, Slate, The Telegraph, CBC, and Radio One. Carter Jackson also sits on the board for Transition Magazine where other essays of hers have been published. She earned her Ph.D in American History at Columbia University.

L’Merchie Frazier, public fiber and installation artist, innovator, poet and holographer, is Director of Education and Interpretation for the Museum of African American History, Boston/Nantucket. Curating the Museum’s collection/exhibits, she provides place-based education and interdisciplinary history programs, projects and lectures, promoting STEM / STEAM pedagogy, Faculty/ Teachers’ Institutes and the Cross Cultural Classroom. She is adjunct faculty for Pine Manor College, Chestnut Hill, Massachusetts. L’Merchie is a member of Women of Color Quilter’s Network Her fiber works series, The Quilted Chronicles, document history and memory, inclusive of innovative technology. Her selected works are included in several art publications and in the permanent collections of the Museum of Art and Design, the Smithsonian Institute and the White House.