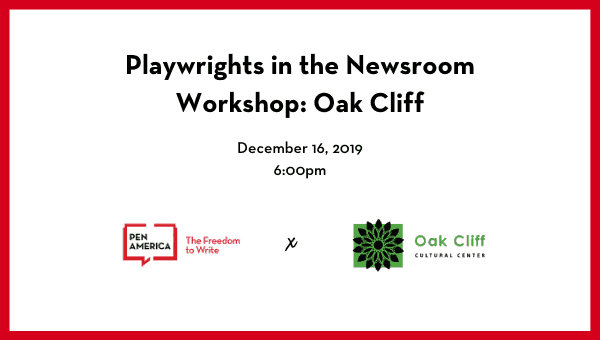 In the fall of 2017, playwrights Janielle Kastner and Brigham Mosley were commissioned by The Dallas Morning News and Ignite/Arts Dallas to write a play about journalism. After two years of work—spending 100+ hours in the newsroom, shadowing journalists, interviewing professionals, and creating a first draft of their play—they need your help. Join these playwrights in this intimate gathering to workshop the play, and discuss how theater and the arts can be used to understand and engage with local news.

The event also features Eva Arreguin, artist and founder of De Colores Collective, in conversation with the playwrights. This event will also feature and invite local Latinx millennials into the dialogue.

Brigham Mosley was a 2013 Performing Beyond Limits resident at New York City’s The New Museum, as well as a member of the 2015 Dallas Theater Center Playwrights Workshop. He is a founding member of Dallas’s The Tribe (winner of the 2016 Dallas Observer Mastermind Award) and was named a 2016 Queer Local of the Year by The Dallas Voice.

Janielle Kastner is a 2016 Mastermind (Dallas Observer) and was recently named best new playwright in Dallas Best Of 2016 (Dallas Observer). She is working on a new play commission from Dallas Theater Center, where she was an inaugural member of the Dallas Playwrights’ Workshop with Will Power. Her play, “OPHELIA UNDERWATER,” was selected as one of TheaterJones’ best new plays by Local Writers.

Eva Arreguin is a co-founder of De Colores Collective, an Oak Cliff-based arts group focused on lifting up and uniting marginalized communities. The group hosts “De Colores Radio,” a podcast that’s been featured on Latina.com, Autostraddle.com, Buzzfeed, the Dallas Observer, and The Dallas Morning News. Through De Colores, Arreguin aims to grow with her community as they tackle news and popular culture with a fun, conscious vibe.