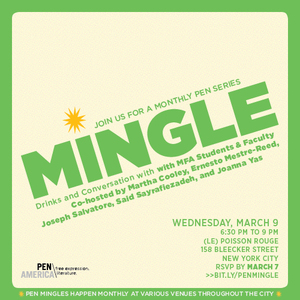 This is a Free event, but space is limited. Please RSVP by Monday, March 7.

PEN America is thrilled to present our March Mingle with a number of creative writing MFA programs, including Adelphi University, Brooklyn College, Hunter College, the New School, and New York University. This event is open to current and prospective MFA students and faculty from all programs as well as all those who are interested in PEN’s work to protect free expression and foster a robust literary community.

PEN Mingles are social gatherings hosted at venues throughout the city. We hope you can join us for an evening of drinks, engaging conversation, and updates on PEN’s work defending free expression at home and abroad.

Sign up to become a PEN Member or renew your Membership at the event and receive a 25% discount off Professional Membership. Or become a Student Advocate Member for $25/year. 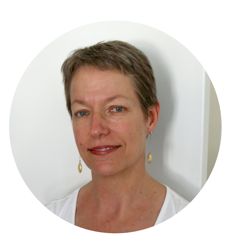 Martha Cooley is a novelist and author of short fiction, essays, and poetry whose work has appeared in leading literary journals. Her first novel, The Archivist, was a best-seller published in a dozen foreign markets, and her second, Thirty-Three Swoons, was also published in Italian. Martha translates prose and poetry from the Italian and has taught numerous workshops and seminars in Italy. A Professor of English at Adelphi University, she served for fifteen years on the core faculty of the Bennington Writing Seminars. She is an active member of PEN America and sits on the PEN Membership Committee. 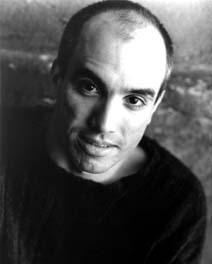 Ernesto Mestre-Reed is the author of The Lazarus Rumba and The Second Death of Única Aveyano. He has translated fours novels from the Spanish and has received fellowships from the New York Foundation for the Arts and the John Simon Guggenheim Memorial Foundation. He is Professor of Fiction at Brooklyn College. 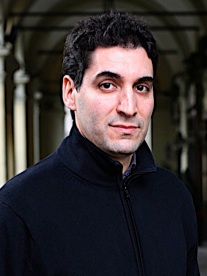 Saïd Sayrafiezadeh was born in Brooklyn and raised in Pittsburgh. He is the author of the story collection, Brief Encounters With the Enemy (a finalist for the 2014 PEN/Robert W. Bingham Fiction Prize) and the critically acclaimed memoir, When Skateboards Will Be Free, selected as one of the ten best books of the year by Dwight Garner of The New York Times. His short stories and personal essays have appeared in The New Yorker, The Paris Review, Granta, McSweeney’s, The New York Times, The Best American Nonrequired Reading and NewAmerican Stories, among other publications. He is the recipient of a Whiting Writers’ Award for nonfiction and a fiction fellowship from the Cullman Center for Scholars and Writers. Saïd lives in New York City with his wife, the artist Karen Mainenti, and serves on the board of directors for the New York Foundation for the Arts. He teaches memoir in the MFA program at Hunter College and creative writing at New York University, where he received a 2013 Outstanding Teaching Award. 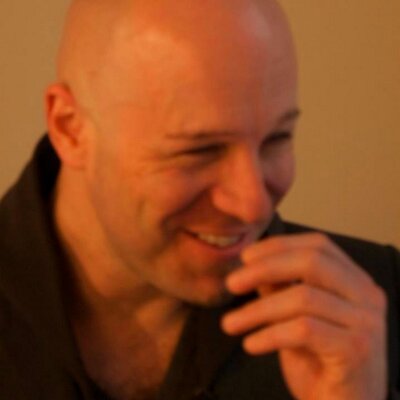 Joseph Salvatore has published fiction and criticism in The Brooklyn Rail, Dossier Journal, H.O.W. Journal, LIT, New York Tyrant, Open City, Post Road, Salt Hill, Sleeping Fish, Willow Springs, 110 Stories (NYU Press, 2001), and Routeledge’s Encyclopedia of Queer Culture (2003). He is a frequent fiction reviewer for the New York Times Book Review, and an Assistant Professor at The New School, where he founded their literary journal, LIT, and where he was awarded the University’s Award for Teaching Excellence. He is the Book Review editor for fiction and poetry at The Brooklyn Rail. His debut collection of short stories, To Assume a Pleasing Shape, from BOA Editions, was published 2011. He lives in New York City. 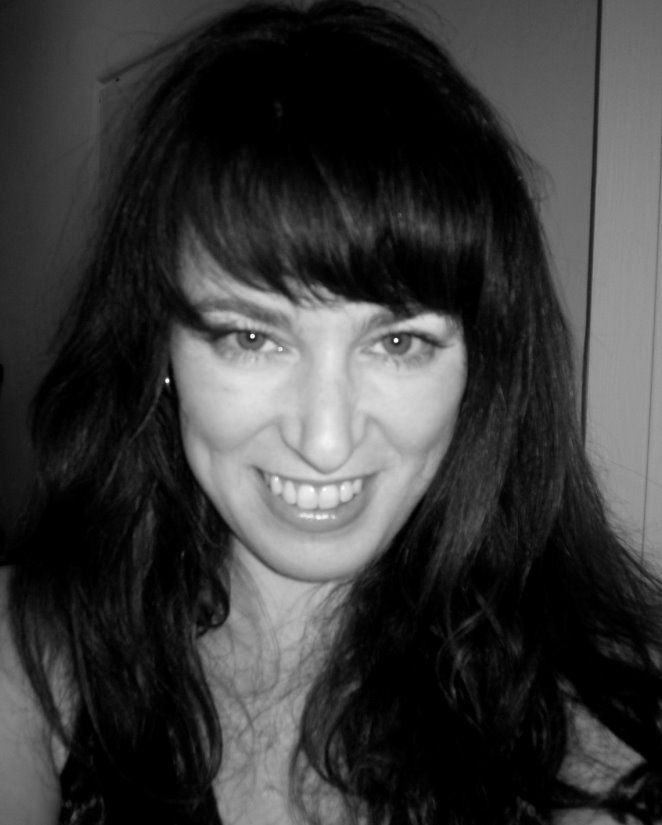 Joanna Yas was the editor of Open City Magazine & Books for over a decade. She is editor-in-chief of Washington Square Review and executive editor of West 10th, and is on the editorial board of The Literary Review. She previously held positions at Ploughshares,Grand Street, and Zoetrope: All-Story. She is co-founder of Editrixie, an editorial services company, and co-editor of the anthology They’re at It Again: Twenty Years of Open City. Joanna is Readings & Special Programs Manager at the NYU Creative Writing Program, where she teaches, co-curates the reading series, and directs the summer writing program.