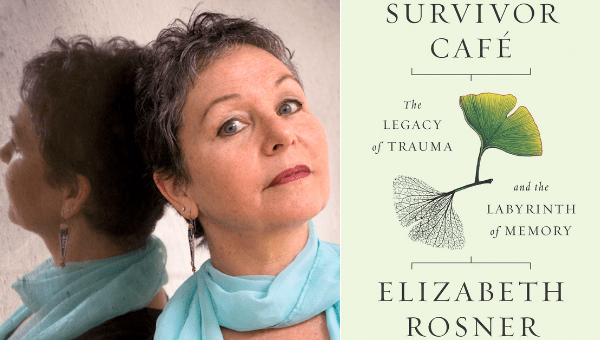 PEN West will feature Elizabeth Rosner, the author of Survivor Café: The Legacy of Trauma and the Labyrinth of Memory in an afternoon reading on 1 December, 3-5PM.

Unfortunately, Madelon Sprengnether will not be able to join us, and we will reschedule her reading from Mourning Freud for Spring or Fall 2019.

As firsthand survivors of many of the 20th century’s most monumental events—the Holocaust, Hiroshima, the Killing Fields—begin to pass away, Survivor Café addresses urgent questions: How do we carry those stories forward? How do we collectively ensure that the horrors of the past are not forgotten?

Examining current brain research, Rosner depicts the efforts to understand the intergenerational inheritance of trauma, as well as the intricacies of remembrance in the aftermath of atrocity. Survivor Café becomes a lens for numerous constructs of memory—from museums and commemorative sites to national reconciliation projects to small-group cross-cultural encounters. Survivor Café offers a clear-eyed sense of the enormity of our 21st-century human inheritance—not only among direct descendants of the Holocaust but also in the shape of our collective responsibility to learn from tragedy, and to keep the ever-changing conversations alive between the past and the present.

Elizabeth Rosner is a bestselling novelist, poet, and essayist living in Berkeley, California. Survivor Café, published in September 2017, is her first book of nonfiction. It was featured on National Public Radio’s “All Things Considered” and in The New York Times. It was a finalist for a National Jewish Book Award and was named one of the best books of 2017 by the San Francisco Chronicle. Her third novel, Electric City, was included among the best books of 2014 by National Public Radio. Her poetry collection, Gravity, was also published in 2014. The Speed Of Light, Rosner’s acclaimed debut novel in 2001, was translated into nine languages. Rosner’s essays and poems have appeared in the NY Times Magazine, Elle, The Forward, and numerous anthologies. www.elizabethrosner.com