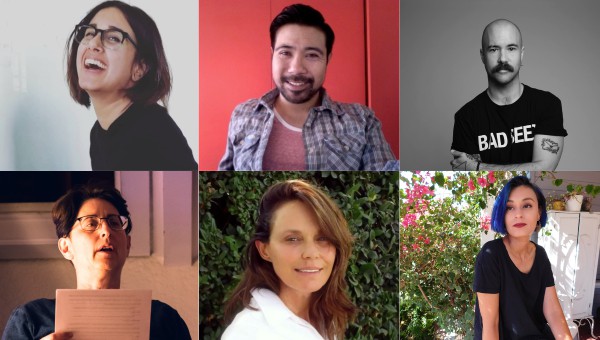 For some LGBTQIA+ people the word “family” can evoke feelings of love and support. For others the word can be slippery and alienating. Many LGBTQIA+ POC folx have chosen to leave home in search of diversity, inclusion, camaraderie, and community. This has created a new landscape in cities and towns across the country: a queer diaspora.

Re-Writing the Family will be a night of curated readings exploring the ideas of family. How we break down the notions placed upon us as LGBTQIA+ POC folx and how we build and place ourselves within the context of family today. How our families of origin inspire us to bridge-build or to reconfigure our place within that framework.

This program is presented as part of LAMBDA LitFest 2019.

A 2019 PEN America Emerging Voices Alumni, Dare Williams is an HIV-positive poet, artist, and activist from Southern California. Dare’s poetry has been featured in Cultural Weekly and magazines including Starrfucker. An alumnus of Home School Claremont, he is currently working on a poetry collection confronting the erasure of queer culture.

Rocío Carlos attends from the land of the chaparral. Born and raised in Los Ángeles, she is widely acknowledged to have zero short-term memory but knows the names of trees. She is the author of (the other house), Attendance, and A Universal History of Infamy: Those of This America. Her poems have appeared in Chaparral, Angel City Review, The Spiral Orb and Cultural Weekly. She is a 2003 PEN America Emerging Voices Fellow. She collaborates as a partner at Wirecutter Collective, and is a teacher of the language arts. Her favorite trees are the olmo (elm) and aliso (sycamore).

2008 PEN America Emerging Voices Fellow Davin Malasarn is lead writer and director of Presidential Communications at Caltech. He has a Ph.D. in biology from Caltech and was a postdoctoral fellow at UCLA and at the Institut de Biologie Physico-Chimique in Paris. His fiction has appeared in The Los Angeles Review, Night Train, Rosebud, SmokeLong Quarterly and others. He was a finalist for the Glimmer Train Very Short Fiction Contest and a featured writer for the New Short Fiction Series.

Kirin Khan is a writer living in Oakland, CA, who calls Albuquerque, New Mexico, her hometown, and Peshawar, Pakistan, her homeland. She is an alumna of VONA/Voices, Las Dos Brujas, and the Tin House Writers Workshop. She is a 2017 PEN America Emerging Voices Fellow, a 2017 SF Writers Grotto Fellow, a 2018 AWP Writer to Writer Mentee, a 2018 Steinbeck Fellow, and the recipient of a 2019 fellowship from the Vermont Studio Center. Her essay “Tight” was nominated by Nat. Brut for a 2018 Pushcart Prize. Her work has appeared in The Margins, sPARKLE & bLINK, Your Impossible Voice, and at 7×7.la, among others. She is working on her first novel.

Marci Carrillo is a Los Angeles writer and a 2014 PEN America Emerging Voice Fellow. Her writing focuses on the effects of generational addiction on families and what happens when the past collides with the present.

Jaime Schaffner is an accountant and writer. Born in Los Angeles and raised in Portland, Oregon, she earned a BA in economics from UC Santa Barbara. A recipient of a PEN America Emerging Voices Fellowship and a Kirkwood Award Finalist, her work appears in the anthology Best Lesbian Romance. She is completing her first novel, Get the Girl, and lives in Los Angeles with her wife, Melissa, and cat, Buffy the rodent slayer.