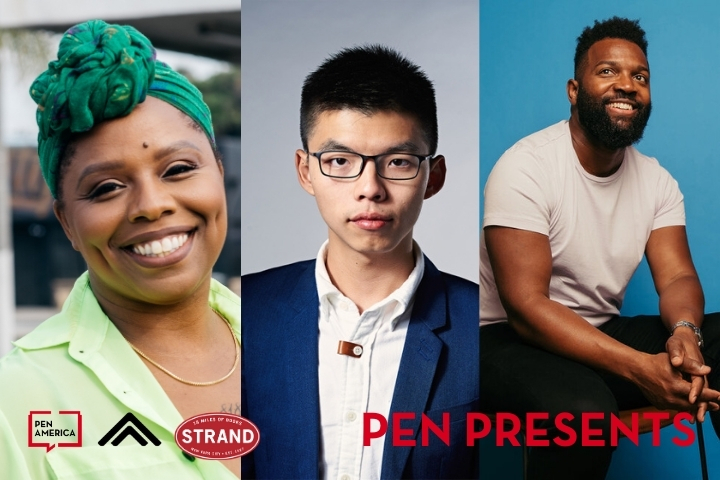 Join us for a special event featuring Black Lives Matter movement cofounder and author Patrisse Cullors in conversation with Hong Kong pro-democracy activist Joshua Wong. Cullors’s new YA adaptation of When They Call You a Terrorist (co-written with asha bandele) shows young people how to protest from a place of love and care for those victimized by powerful people—a phenomenon Wong has experienced firsthand as a young leader of the pro-democracy movement in Hong Kong.

The two will talk with comedian and cultural critic Baratunde Thurston about resistance, fighting for justice, and what happens when protest movements are treated as threats rather than acts of empowerment. This illuminating conversation will also touch on how young people can make a difference and seek the change they wish to see in the world by fighting for issues they’re passionate about. This event is free to the public.

Order Cullors’ new edition of When They Call You a Terrorist for young adults from Strand Bookstore today. Books will begin shipping on the day of publication, Tuesday, September 29.

Patrisse Cullors is an artist, organizer, and freedom fighter from Los Angeles, CA. Cofounder of the Black Lives Matter Global Network and founder of the Los Angeles-based grassroots organization Dignity and Power Now, she is also a performance artist, Fulbright Scholar, popular public speaker, and a Sydney Peace Prize recipient. For 20 years, Cullors has been on the front line of criminal justice reform and is currently leading Reform L.A. Jails, a ballot initiative that was won in March 2020. Cullors is currently the faculty director of Arizona’s Prescott College’s new Social and Environmental Arts Practice MFA program, where she developed a curriculum focused on the intersection of art, social justice, and community organizing that is the first of its kind in the nation.

Joshua Wong is a Hong Kong pro-democracy activist. He was one of the leaders of the 2014 Occupy Movement. In August 2017, he was jailed for six months for storming the government ­headquarters compound at ­Tamar, Hong Kong, which sparked the 79-day protest.

Baratunde Thurston is an Emmy-nominated host who has worked for The Onion, produced for The Daily Show, advised the Obama White House, and wrote The New York Times bestseller How To Be Black. He’s the executive producer and host of two podcasts: How To Citizen with Baratunde and We’re Having a Moment, which CNET called “the most important podcast of 2020.” He’s also the creator and host of the weekly pandemic show, Live on Lockdown. In 2019, he delivered “How to Deconstruct Racism, One Headline at a Time,” what MSNBC’s Brian Williams called “one of the greatest TED talks of all time.” Right now, the writer, activist and comedian is using his powerful voice to help people understand this revolutionary moment with his unique blend of insight, humor, and empathy.

A report today suggested the secretary of state may classify leading human rights groups @hrw, @Oxfam, and @amnesty as "anti-Semitic." Such a designation would be an affront to the First Amendment and a demonization of human rights work globally. https://bit.ly/3ogeDja

Nigerian forces opened fire Tuesday night at a demonstration in Lagos against police brutality. The extent of the casualties was unclear, but some witnesses reported seeing people who were killed. https://nyti.ms/2HtLBeI

The fiancee of Saudi journalist Jamal Khashoggi and a human rights organization that he founded have accused Crown Prince Mohammed bin Salman of ordering Khashoggi's killing to "permanently silence" his advocacy for democratic reform in the Arab world. https://wapo.st/2FN8QQC