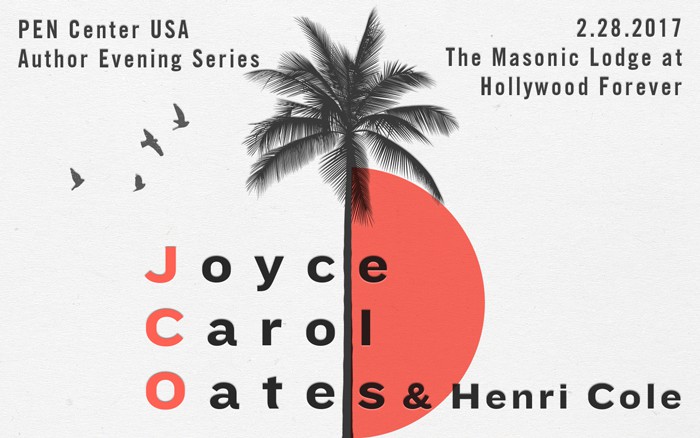 PEN Presents celebrates the power of words to inform, entertain, inspire, and foster a vital literary culture. This evening’s event will include a brief reading by Joyce Carol Oates followed by a conversation between Oates and award-winning poet Henri Cole.

Joyce Carol Oates, a New York Times bestselling author will read from and then discuss A Book of American Martyrs, her powerfully resonant and provocative new novel. In this moving, insightful portrait, Joyce Carol Oates fully inhabits the perspectives of two interwoven families whose destinies are defined by their warring convictions.

Joyce Carol Oates is a recipient of the National Humanities Medal, the National Book Critics Circle Ivan Sandrof Lifetime Achievement Award, the National Book Award, and the PEN/Malamud Award for Excellence in Short Fiction. She has written some of the most enduring fiction of our time, including the national bestsellers We Were the Mulvaneys, Blonde (a finalist for the National Book Award and the Pulitzer Prize), and the New York Times bestsellers The Falls (winner of the 2005 Prix Femina Etranger) and The Gravedigger’s Daughter. She is the Roger S. Berlind Distinguished Professor of the Humanities at Princeton University and has been a member of the American Academy of Arts and Letters since 1978. In 2003 she received the Common Wealth Award for Distinguished Service in Literature, and in 2006 she received the Chicago Tribune Lifetime Achievement Award.

Henri Cole was born in Fukuoka, Japan, in 1956. He has published nine collections of poetry including Middle Earth, which was a finalist for the Pulitzer Prize in Poetry. He has received many awards for his work, including the Jackson Prize, the Kingsley Tufts Award, the Rome Prize, the Berlin Prize, a Guggenheim Fellowship, the Lenore Marshall Award, and, most recently, a fellowship from the Radcliffe Institute at Harvard. His ninth collection, Nothing to Declare, was published by Farrar, Straus and Giroux last spring. He teaches at Claremont McKenna College.

A portion of the event proceeds will benefit PEN Center USA’s Freedom To Write programming, including the Emergency Writers Fund. For more info: penusa.org.