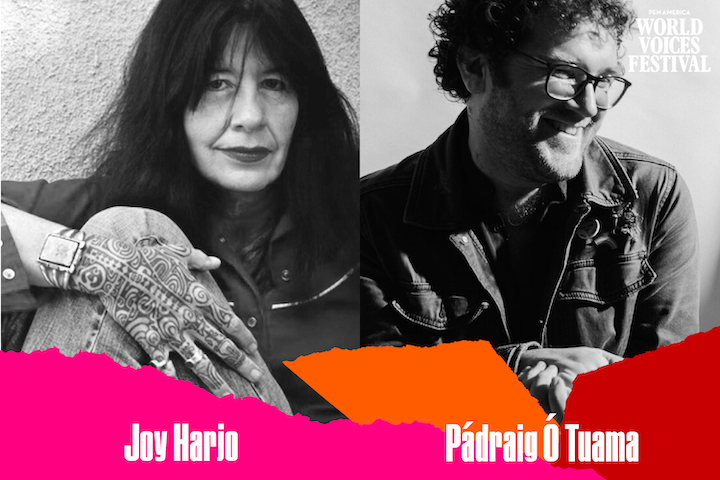 “I  release  you,  my  beautiful  and  terrible  fear. / I  release  you,” writes Joy Harjo in her poem “I Give You Back,” now reconceived, on her first album in 10 years, as the track “Fear,” a liberatory incantation across a menacing landscape of drums, bass, and distantly roaring guitar. The U.S. Poet Laureate and consummate musician describes to Iowa Public Radio that the album, I Pray for My Enemies, came together “during [the] pandemic, during a lot of fear and fear-based division. . . during a really harsh political time of racial hatred,” and that, like much music in Mvskoke tradition, it “was created to be useful.” Harjo, who plays saxophone and flute and has produced six albums in addition to highly acclaimed volumes of poetry, children’s books, and memoirs, here brings music and the stories and sounds of her experience as a member of the Mvskoke (Creek) Nation into funky, vibrant spoken word. In her own words, I Pray for My Enemies addresses “an urgent need to deal with discord and opposition” through song in the hopes of inspiring hearts all around the world “to beat together.”

In light of the album’s release and in anticipation of her groundbreaking anthology of First peoples’ poetry, Living Nations, Living Words (out this May), Harjo discusses life, music, and activism in the aftermath of the pandemic, and Native poetry as a gateway to understanding American history. She will be interviewed by the Irish poet and theologian Pádraig Ó Tuama.

This digital event will start at 12pm ET / 9am PT. If you have any questions, please visit our FAQs.

Joy Harjo’s nine books of poetry include An American Sunrise, Conflict Resolution for Holy Beings, How We Became Human: New and Selected Poems, and She Had Some Horses. Harjo’s first memoir, Crazy Brave, won several awards, including the PEN USA Literary Award for Creative Nonfiction and the American Book Award. Her second memoir, Poet Warrior, invites us to travel along the heartaches, losses, and humble realizations of her “poet-warrior” road. She co-edited two anthologies of contemporary Native women’s writing: When the Light of the World was Subdued, Our Songs Came Through and Reinventing the Enemy’s Language: Native Women’s Writing of North America, one of The Observer’s Best Books of 1997. She is the recipient of the Ruth Lilly Poetry Prize for lifetime achievement from the Poetry Foundation, the 2015 Wallace Stevens Award from the Academy of American Poets for proven mastery in the art of poetry, a Guggenheim Fellowship, the William Carlos Williams Award from the Poetry Society of America, and a United States Artists’ fellowship.

In 2014, she was inducted into the Oklahoma Writers Hall of Fame. A renowned musician, Harjo performs with her saxophone nationally and internationally, solo and with her band, the Arrow Dynamics. She has five award-winning CDs of music, including the award-winning album Red Dreams, A Trail Beyond Tears and Winding Through the Milky Way, which won a Native American Music Award for Best Female Artist of the Year in 2009. Harjo’s latest is a book of poetry from W. W. Norton & Company, An American Sunrise. In 2019, Harjo was appointed the 23rd United States Poet Laureate, the first Native American to hold the position. She lives in Tulsa, OK.

Irish poet and theologian Pádraig Ó Tuama’s work centers around themes of language, power, conflict, and religion. He is the author of four books of poetry and prose: Daily Prayer with the Corrymeela Community, In the Shelter, Sorry For Your Troubles, and Readings from the Book of Exile. He presents the podcast “Poetry Unbound” with On Being Studios, where he also has responsibilities in bringing art and theology into public and civic life. From 2014 to 2019, he was the leader of the Corrymeela Community, Ireland’s oldest peace and reconciliation community. He is based in Ireland.

Magic City Books is an independent bookstore owned by the Tulsa Literary Coalition, a 501(c)(3) nonprofit corporation. Located in the Archer Building on the corner of Archer and Detroit in the vibrant Tulsa Arts District in downtown Tulsa, they specialize in literary and popular fiction and narrative nonfiction for adults. They also offer carefully curated sections for children and teens.