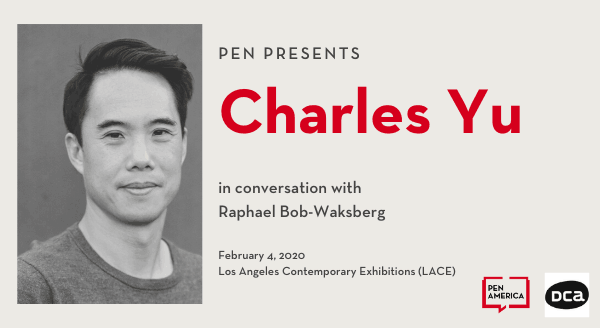 Charles Yu’s novel Interior Chinatown is a brilliant, funny, personal story about race, pop culture, assimilation, and escaping the roles we are expected to play in America. The story follows actor Willis Wu as he tirelessly works towards graduating from Generic Asian Man to Kung Fu Guy, the role he has hoped for since childhood. Once his dreams have come true, he realized that being Kung Fu Guy may not save him from falling out of the story. Yu will be joined in conversation by author, producer, and comedian Raphael Bob-Waksberg.

This program is presented in partnership with LACE and Skylight Books.

Charles Yu is the author of three books, including the novel How to Live Safely in a Science Fictional Universe (a New York Times Notable Book and a Time magazine best book of the year). He received the National Book Foundation’s 5 Under 35 Award and was nominated for two Writers Guild of America Awards for his work on the HBO series Westworld. He has also written for shows on FX, AMC, and HBO. His fiction and nonfiction have appeared in The New Yorker, The New York Times, The Wall Street Journal, and Wired, among other publications.

Raphael Bob-Waksberg is the creator and executive producer of the Netflix series BoJack Horseman, and the author of Someone Who Will Love You in All Your Damaged Glory.