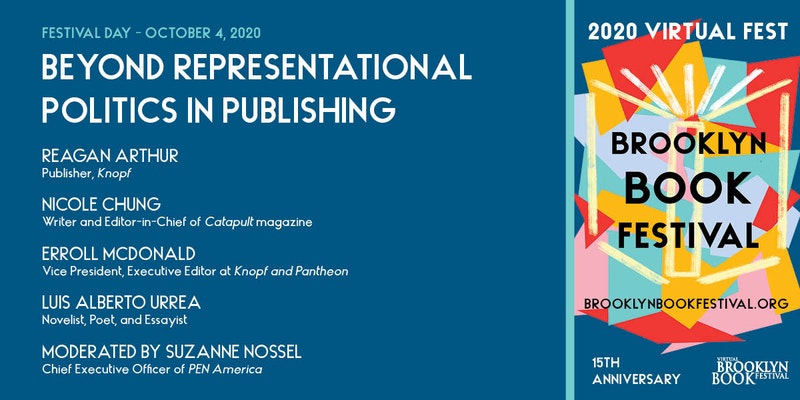 As recent but all too familiar events force the country to grapple with its legacy of violence and racism, igniting a hopeful movement for substantive change across government and within industries, it is vital to engage not only perennial questions about representational politics in publishing, but also the material and demographic inequities in the industry that enable the exclusion of many voices and experiences. Our panel of professionals, from publishers to writers, weighs in on the current state of publishing, remedies to inequity in all its forms, and ways to move forward towards a vibrant and more just industry.

Reagan Arthur is executive vice president and publisher of Knopf Pantheon Schocken, which she joined in February 2020 after nearly 20 years at Little, Brown and Company, where she’d been publisher since 2013. Authors she has edited include Kate Atkinson, Tina Fey, Joshua Ferris, Elin Hilderbrand, Attica Locke, and George Pelecanos.

Nicole Chung was born and raised in the Pacific Northwest. Her nationally bestselling debut memoir All You Can Ever Know was a finalist for the National Book Critics Circle Award for Autobiography, longlisted for the PEN Open Book Award, and named a Best Book of the Year by The Washington Post, The Boston Globe, NPR, TIME, Library Journal, Goodreads, and Chicago Public Library, among many others. Chung has written for numerous publications, including The New York Times, GQ, The Guardian, New York Magazine, Longreads, Slate, and Hazlitt, and has taught writing workshops for Kundiman, Catapult, and PEN/Faulkner’s Writers in Schools program. She is the editor-in-chief of Catapult magazine, co-editor of the anthology A Map Is Only One Story, and the former managing editor of The Toast. Her next book is forthcoming from Ecco Books/HarperCollins.

Luis Alberto Urrea was born in Tijuana, Mexico. He is a 2019 Guggenheim Fellow, the author of 18 books, and has won numerous awards for his poetry, fiction, and essays. His nonfiction book The Devil’s Highway won the Lannan Literary Award and was a finalist for the Pulitzer Prize and the Pacific Rim Kiriyama Prize. His latest novel, The House of Broken Angels, was a 2018 finalist for the National Book Critics Circle Award and a New York Times Notable Book of the Year. He won an American Academy of Arts and Letters Fiction Award in 2016 for his collection of short stories, The Water Museum, which was also a finalist for the PEN/Faulkner Award. Urrea’s novel Into the Beautiful North is a Big Read selection of the National Endowment of the Arts. He is a distinguished professor of creative writing at the University of Illinois-Chicago.

Suzanne Nossel is the chief executive officer at PEN America and author of Dare to Speak: Defending Free Speech for All. Prior to joining PEN America, she served as the chief operating officer of Human Rights Watch and as executive director of Amnesty International USA. She has served in the Obama Administration as deputy assistant secretary of state for international organizations, leading U.S. engagement in the UN and multilateral institutions on human rights issues, and in the Clinton Administration as deputy to the U.S. ambassador for UN management and reform. Nossel coined the term “Smart Power,” which was the title of a 2004 article she published in Foreign Affairs magazine and later became the theme of Secretary of State Hillary Clinton’s tenure in office. She is a featured columnist for Foreign Policy magazine and has published op-eds in The New York Times, The Washington Post, and the Los Angeles Times, as well as scholarly articles in Foreign Affairs, Dissent, and Democracy, among others. Nossel serves on the board of directors of the Tides Foundation. She is a former senior fellow at the Century Foundation, the Center for American Progress, and the Council on Foreign Relations. Nossel is a magna cum laude graduate of both Harvard College and Harvard Law School.

Join @KweliJournal for a special conversation with author Naima Coster (@zafatista) about her latest book, WHAT'S MINE AND YOURS, on 10/26 at 7:30PM ET. Register here: https://bit.ly/34llD6c.

Submissions for the 2021 PEN/Robert J.Dau Short Story Prize for Emerging Writers are now open through November 15th, 2020. 12 winners will receive $2000 each and their stories will be published in @CatapultStory's annual anthology: https://bit.ly/3dOwfhg. #PENLitAwards