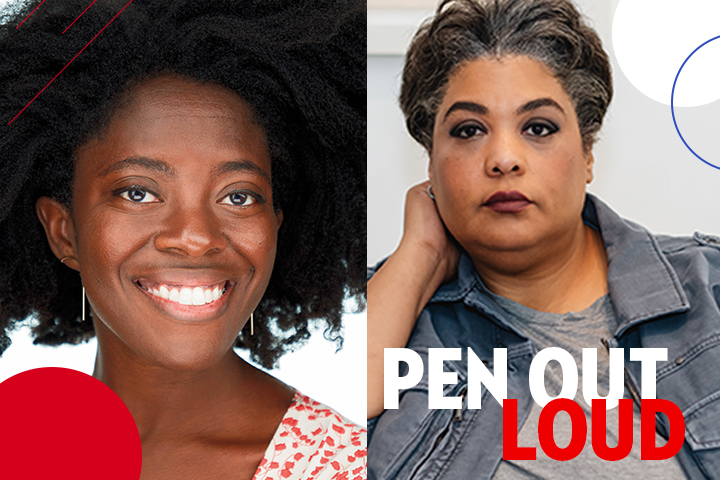 BUY TICKETS
The first 400 Admission With Book tickets will include a signed copy of the book.

Bestselling author Yaa Gyasi joins PEN Out Loud to celebrate the publication of her powerful and multilayered novel, Transcendent Kingdom. In this timely narrative, Gyasi demonstrates her range and ambition in a book that is vastly different from her lauded debut, Homegoing. She will be joined in conversation with bestselling author Roxane Gay to discuss her new novel, which focuses on the life of a family of Ghanaian immigrants in Huntsville, Alabama wrestling with faith, science, race, and the legacy of unmanageable loss.

Yaa Gyasi was born in Ghana and raised in Huntsville, Alabama. She holds a BA in English from Stanford University and an MFA from the Iowa Writers’ Workshop, where she held a Dean’s Graduate Research Fellowship. She lives in Brooklyn.

Roxane Gay’s writing appears in Best American Mystery Stories 2014, Best American Short Stories 2012, Best Sex Writing 2012, Harper’s Bazaar, A Public Space, McSweeney’s, Tin House, Oxford American, American Short Fiction, Virginia Quarterly Review, and many others. She is a contributing opinion writer for The New York Times. She is the author of the books Ayiti, An Untamed State, the New York Times bestselling Bad Feminist, the nationally bestselling Difficult Women, and New York Times bestselling Hunger: A Memoir of My Body. She is also the author of World of Wakanda for Marvel and the editor of Best American Short Stories 2018. She is currently at work on film and television projects, a book of writing advice, an essay collection about television and culture, and a YA novel entitled The Year I Learned Everything.

The PEN Pod: On White Supremacy and Immigration with Jean Guerrero

There are thousands of QAnon groups on Facebook, with millions of members, according to an internal company document reviewed by @NBCNews. https://bit.ly/2DZdQ3I

Disinformation is spreading quickly on social media, from fake news on social media about fires on the west coast to purveyors peddling election conspiracy theories. https://bit.ly/3bZ1k0U

Tomorrow, join PEN America, @HumanitiesGC, @CullmanNYPL, & @segalcenter for Week 19 of Translating the Future as we continue our series of conversations between translators with “Activist Translation,” with Anton Hur, Sevinç Türkkan, and JD Pluecker. https://bit.ly/2DybNn6