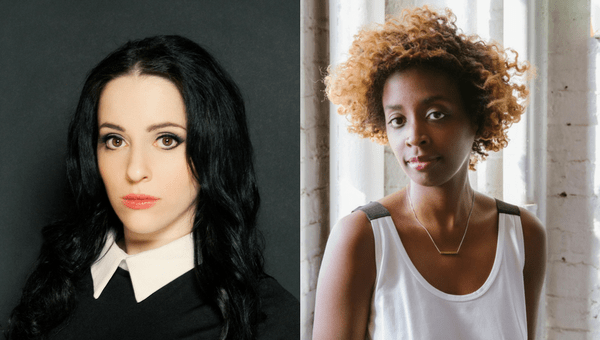 May’s PEN Out Loud event brings together two authors with newly released books which contribute to the literature of war: Molly Crabapple, who co-wrote and illustrated Marwan Hisham’s new memoir Brothers of the Gun: A Memoir of the Syrian War, and Alexis Okeowo, author of A Moonless Starless Sky: Ordinary Women and Men Fighting Extremism in Africa. Together, these writers help us ask and answer tough questions on the politics of turning conflict into story by showing us large and small manifestations of revolution, and illuminating the ways geographically distinct conflicts and revolutions intersect.

Molly Crabapple is an artist and writer in New York. Her memoir, Drawing Blood, was published by HarperCollins in 2015. Brothers of the Gun, her illustrated collaboration with Syrian war journalist Marwan Hisham, will be published by One World/Penguin Random House in May 2018. Her reportage has been published in The New York Times, New York Review of Books, The Paris Review, Vanity Fair, The Guardian, VICE, and elsewhere. She has been the recipient of a Yale Poynter Fellowship, a Front Page Award, and a Gold Rush Award, and shortlisted for a Frontline Print Journalism Award. She is often asked to discuss her work chronicling the conflicts of the 21st century, and has appeared on “All In” with Chris Hayes, Amanpour, NPR, BBC News, PRI, and more. The New Yorker described her 2017 mural “The Bore of Babylon” as “a terrifying amalgam of Hieronymus Bosch, Honoré Daumier, and Monty Python’s Flying Circus.” Her art is in the permanent collections of the Museum of Modern Art, the Rubin Museum of Art and the New York Historical Society.

Alexis Okeowo is the author of A Moonless, Starless Sky: Ordinary Women and Men Fighting Extremism in Africa, which won the 2018 PEN Open Book Award. Her work has appeared in The New Yorker, The New York Times Magazine, the Financial Times, Time, and Fortune, and been anthologized in The Best American Travel Writing and The Best American Sports Writing. She lives in Brooklyn.