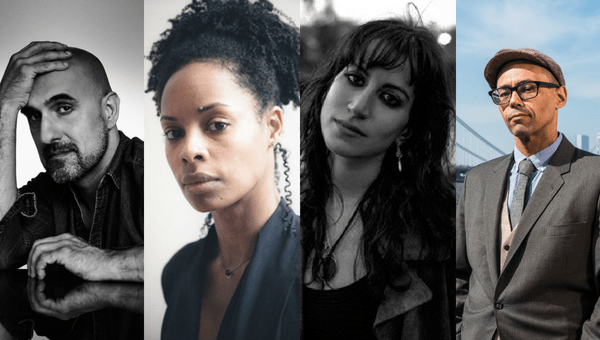 As Chimamanda Ngozi Adichie so eloquently puts it: “When we realize there is never a single story about a place, we regain a kind of paradise.” This June, PEN America Literary Awards finalists Hari Kunzru, Victor LaValle, Nicole Sealey, and Hannah Lillith Assadi will join us for PEN Out Loud, reading from their works and bringing a glimpse of paradise to the Strand Book Store. Through a wide range of genres and themes, we will celebrate the multiplicity of American stories which define the American literary canon as we know it, showcasing the masterful breadth of work being published and celebrated today.

Hannah Lillith Assadi holds an MFA in fiction from the Columbia University School of the Arts. She was raised in Arizona and lives in Brooklyn. Her novel Sonora (Soho, 2017) received the Rosenthal Family Foundation Award in Literature from the American Academy of Arts and Letters and was a finalist for the PEN/Robert W. Bingham Prize for Debut Fiction.

Hari Kunzru is the author of five novels, most recently White Tears. His work has been translated into 21 languages, and his short stories and journalism have appeared in many publications, including The New York Times, The Guardian, and The New Yorker. He is the recipient of fellowships from the Guggenheim Foundation, The New York Public Library, and the American Academy in Berlin. He currently lives in Brooklyn.

Victor LaValle is the author of seven works of fiction and one comic book. His most recent novel, The Changeling, was named one of the 10 Best Books of 2017 by Time magazine, USA Today, and the New York Public Library. His comic book, Victor LaValle’s Destroyer, is a continuation of Mary Shelley’s Frankenstein taking place in the modern day and tackling contemporary political issues. He teaches writing at Columbia University.

Nicole Sealey is the author of Ordinary Beast, a finalist for the 2018 PEN Open Book Award. Her other honors include a Jerome Foundation Travel and Study Grant, an Elizabeth George Foundation Grant, the Stanley Kunitz Memorial Prize from The American Poetry Review, and many others. Her work has appeared in or is forthcoming from Best American Poetry 2018, The New Yorker, The New York Times, and elsewhere. Nicole holds an MLA in Africana studies from the University of South Florida and an MFA in creative writing from New York University. She is the executive director at Cave Canem Foundation and the 2018-2019 Doris Lippman Visiting Poet at the City College of New York.