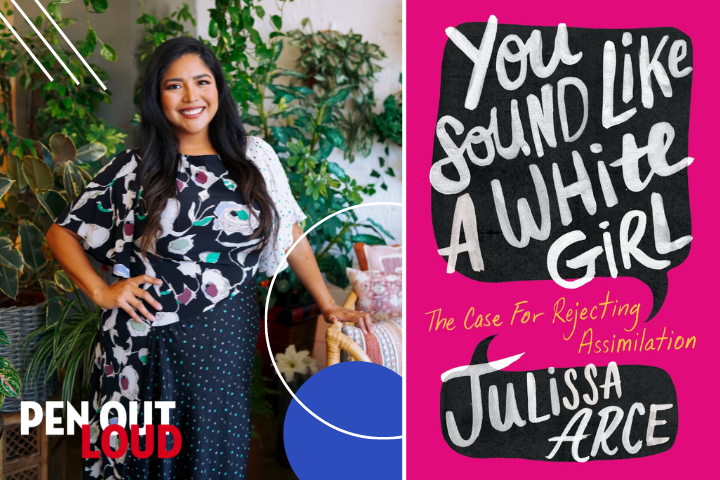 GET TICKETS
This is a free event.

Bestselling author and cofounder of the Ascend Educational Fund Julissa Arce joins PEN Out Loud to launch her new book You Sound Like a White Girl: The Case for Rejecting Assimilation. Reflecting on the words in the book’s title, an accusation she heard growing up, Arce “interweaves her own experiences with cultural commentary” to critique the values of assimilation, and to offer a new perspective that “belonging only comes through celebrating yourself, your history, your culture, and everything that makes you uniquely you.” Arce will be in conversation with comedian, writer, and producer Aida Rodriguez.

This in-person event will start at 10pm ET / 7pm PT. Virtual viewing will also be available.

Books are provided by the Huntley Bookstore of the Claremont Colleges.

Julissa Arce is a nationally recognized author, sought-after speaker, producer, and social changemaker. She is the bestselling author of My (Underground) American Dream and Someone Like Me. Arce is a Crooked Media contributor and a frequent writer for TIME, and has provided political commentary across numerous TV networks including NBC News, Bloomberg, CNN, and MSNBC. She is the cofounder of the Ascend Educational Fund, a college scholarship and mentorship program for immigrant students regardless of their immigration status. She lives in Los Angeles with her family. Photo Credit: Aly Honore

Aida Rodriguez is taking the world of entertainment by storm with her wit, strong performances, and charismatic personality. Making history as the first Latina to appear in two comedy specials airing in one month on both HBO and Showtime, Rodriguez was handpicked by director Taylor Hackford for his film The Comedian starring Robert De Niro.

Rodriguez’s half-hour special was featured as part of Tiffany Haddish’s breakout series They Ready, which was executive produced by Haddish, Wanda Sykes, and Page Hurwitz for Netflix. She is currently in development on her half-hour scripted series with HBO Max, for which she will write, executive produce, and star in. Rodriguez is also developing an animated series with ITV Studios and Nick Weidenfeld. She will produce her first one-hour special (also with WarnerMedia) for HBO Max.