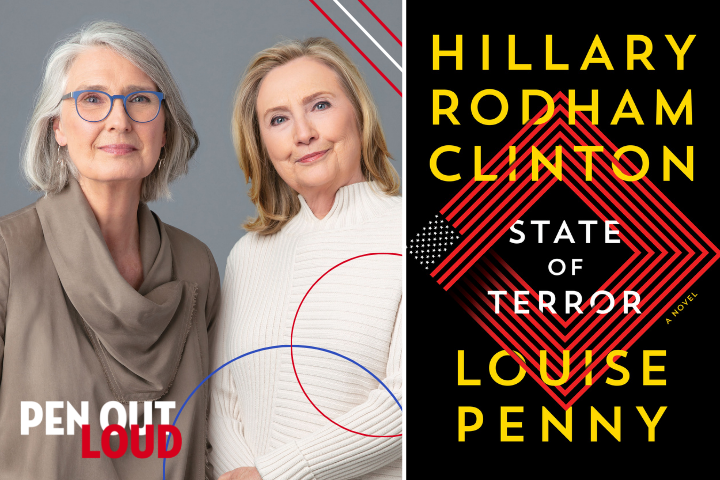 GET TICKETS
Each book will come with a signed bookplate.

This digital event will start at 7pm ET / 4pm PT.

Hillary Rodham Clinton is the first woman in U.S. history to become the presidential nominee of a major political party. She served as the 67th secretary of state after nearly four decades in public service advocating on behalf of children and families as an attorney, First Lady, and U.S. senator. She is a wife, mother, grandmother, and author of seven previous books, all published by Simon & Schuster. Photo Credit: Dominique Lafond and Deborah Feingold

Louise Penny is an international award-winning and bestselling author whose books have hit No. 1 on The New York Times, USA TODAY, and The Globe and Mail lists. Her Chief Inspector Armand Gamache novel series, published by Minotaur Books (an imprint of the St. Martin’s Press), have been translated into 31 languages. In 2017, she received the Order of Canada for her contributions to Canadian culture. Penny lives in a village south of Montréal. Photo Credit: Dominique Lafond and Deborah Feingold

Susan Choi is an American novelist. Choi’s first novel, The Foreign Student, won the Asian American Literary Award for fiction. Her second novel, American Woman, was a finalist for the 2004 Pulitzer Prize. Her third novel, A Person of Interest, was a finalist for the 2009 PEN/Faulkner Award for Fiction. In 2010, she was named the inaugural recipient of the PEN/W. G. Sebald Award. Her fourth novel, My Education, received a 2014 Lambda Literary Award. Her fifth novel, Trust Exercise, won the 2019 National Book Award for Fiction. Her first book for children, Camp Tiger, was also published in 2019. A recipient of fellowships from the National Endowment for the Arts and the John Simon Guggenheim Memorial Foundation, she teaches fiction writing at Yale University and lives in Brooklyn. Photo Credit: Heather Weston

This request to remove Robie Harris's 'It's Perfectly Normal' epitomizes where we are in the book ban fight -- the complainant was not even in a parent in the district! Often, these complaints are just being fired off wherever they can be lodged. https://www.seacoastonline.com/story/news/education/2021/12/01/york-school-department-gets-request-remove-changing-bodies-book/8807003002/

"Diversity in the Media is 10-20% less diverse than the general US workforce." @OMFoundation executive director Tony Shawcross @Deproduction spoke on the lack of proper representation in America’s media landscape at PEN America's Keeping It Local event: https://bit.ly/3l1ADyp.

Troubled by this cancellation at @UofSC. The pressures on universities to cancel academic discussions that might in any way be contentious is growing -- but universities have got to stop giving in to them. #academicfreedom https://twitter.com/KjetilTronvoll/status/1466102267103297541