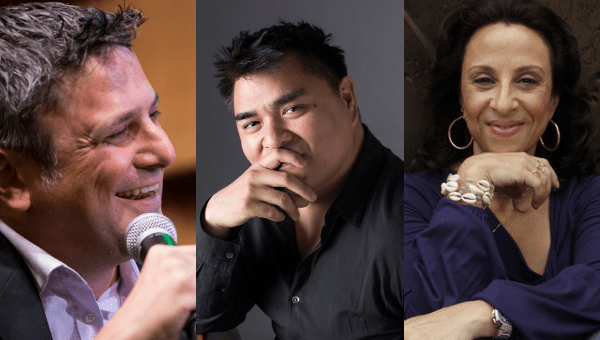 This September, join PEN America in partnership with the Strand Book Store as we present Pulitzer Prize-winning journalist Jose Antonio Vargas in conversation with Latino USA’s and Futuro Media Group’s Maria Hinojosa and Julio Ricardo Varela for the launch of his riveting and deeply personal new book, Dear America: Notes of an Undocumented Citizen.

Blurring the line between memoir and criticism, Dear America offers both an analysis of the condition of immigration and the quest for citizenship, and debunks what it means to be undocumented in America. In conversation, Vargas will challenge notions of home and national identity and discuss the importance of expression in the face of a state that demands assimilation.

Jose Antonio Vargas is a Pulitzer Prize-winning journalist, an Emmy-nominated filmmaker, and a leading voice for the human rights of immigrants. He is the founder and CEO of Define American, the nation’s leading nonprofit media and culture organization that fights injustice and anti-immigrant hate through the power of storytelling. He has worked as a reporter at The Washington Post, The Huffington Post, the San Francisco Chronicle, and other leading publications. He has written stories for The New York Times Magazine and Time, and his work has appeared in Rolling Stone and The New Yorker. In addition, he has produced and directed Documented, an autobiographical feature documentary that aired on CNN, and White People, an hourlong MTV special on what it means to be young and white in a changing America. His many media appearances on every type of platform range across the political and cultural spectrum from Real Time with Bill Maher to Tucker Carlson Tonight. Currently subject to deportation at any time, he has no permanent residence.

Maria Hinojosa is an award-winning news anchor and reporter who covers America’s untold stories and highlights today’s critical issues. In 2010, Hinojosa created the Futuro Media Group, an independent nonprofit organization producing multimedia journalism that gives a critical voice to the diversity of the American experience. As the anchor and Executive Producer of the Peabody Award winning show Latino USA, which is distributed by NPR, and anchor and Executive Producer of the PBS show America By The Numbers with Maria Hinojosa, she has informed millions about the changing cultural and political landscape. In 2016, Hinojosa became the host of In The Thick, Futuro Media’s new political podcast, and Humanizing America, the company’s digital video series that deconstructs stereotypes. Hinojosa’s nearly 30-year history as an award-winning journalist includes reporting for PBS, CBS, WNBC, CNN, NPR, Frontline, and CBS Radio and anchoring the Emmy Award winning talk show Maria Hinojosa: One-on-One. Hinojosa is also a new contributor to the long running award-winning news program CBS Sunday Morning, and is a frequent guest on MSNBC.

As Digital Media Director for Futuro Media, Julio Ricardo Varela works with all of Futuro’s shows and is a key voice is shaping the company’s digital vision. He is also a frequent contributor to Latino USA, and editor of and co-host (with Maria Hinojosa) of In The Thick. Before joining Futuro, Julio was digital producer for Al Jazeera America’s “The Stream” and his work has been featured in many global outlets, including The Washington Post, NBC News, The Guardian, ESPN, The New York Times, Quartz, Le Monde, WGBH, WNYC, Face the Nation, MSNBC, Fusion, Univision and Telemundo. He has made numerous national media appearances for Futuro Media. Julio founded LatinoRebels.com, one of the top U.S. Latino digital media sites in the world. Futuro Media recently acquired Latino Rebels in early 2018. In 2015, the National Association of Hispanic Journalists honored Julio with its inaugural DALE (pronounced like Pitbull would say it) Award, given to “given to an individual or company that steps up and goes above and beyond to ensure Latinos are fairly and accurately represented.” A native of Puerto Rico, Julio spent his childhood between San Juan and the Bronx. He was also a contributing reporter at The Boston Globe. Julio graduated cum laude from Harvard College.