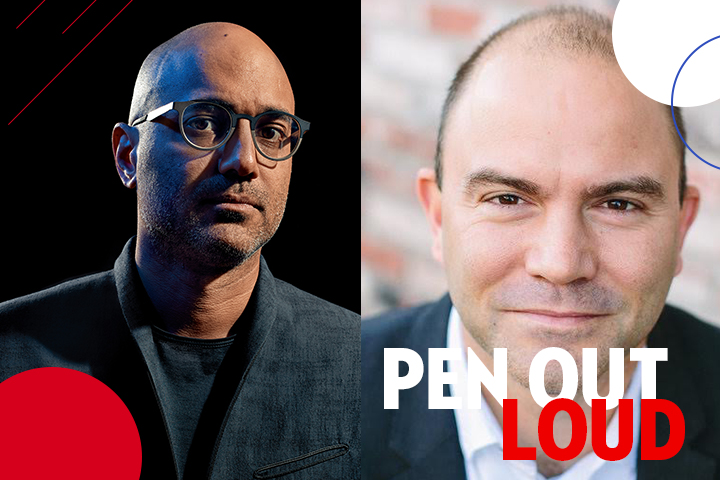 Pulitzer Prize-winning playwright and author Ayad Akhtar joins PEN Out Loud to launch his latest novel, Homeland Elegies, which offers a portrait of Muslim-American life in a fractured country. A deeply personal narrative intended to “speak directly to us about what matters, not metaphorically, not as a commentary upon, but as a voicing of the actual, of the essential, of the real.” Akhtar will be joined in conversation with author and former deputy national security advisor under President Barack Obama, Ben Rhodes, to discuss the novel’s origins and themes, including the immigrant experience, the relationship between fathers and sons, racial identity, and political polarization.

Ayad Akhtar is a novelist and playwright. His work has been published and performed in over two dozen languages. He is the winner of the Pulitzer Prize for Drama and an Award in Literature from the American Academy of Arts and Letters.

Akhtar is the author of American Dervish (Little, Brown & Co.), published in over 20 languages and named a Kirkus Reviews Best Book of 2012, as well as the forthcoming novel, Homeland Elegies (Little, Brown & Co.) in September 2020. As a playwright, he has written Junk (Lincoln Center, Broadway; Kennedy Prize for American Drama, Tony nomination); Disgraced (Lincoln Center, Broadway; Pulitzer Prize for Drama, Tony nomination); The Who & The What (Lincoln Center); and The Invisible Hand (NYTW; Obie Award, Outer Critics Circle John Gassner Award, Olivier, and Evening Standard nominations). As a screenwriter, he was nominated for an Independent Spirit Award for Best Screenplay for The War Within.

Among other honors, Akhtar is the recipient of the Steinberg Playwriting Award, the Nestroy Award, the Erwin Piscator Award, as well as fellowships from the American Academy in Rome, MacDowell, the Sundance Institute, and Yaddo, where he serves as a Board Director. Additionally, Akhtar is a Board Trustee at PEN America and New York Theatre Workshop. He lives in New York City.

Ben Rhodes is the author of The New York Times bestseller The World as It Is; a contributor for NBC News, MSNBC, and Crooked Media; the co-chair of National Security Action; and an advisor to former President Barack Obama. From 2009–2017, Rhodes served as a deputy national security advisor to President Obama. In that capacity, he participated in nearly all of President Obama’s key decisions and oversaw the president’s national security communications, speechwriting, public diplomacy, and global engagement programming. He also led the secret negotiations with the Cuban government that resulted in the effort to normalize relations between the United States and Cuba, and supported the negotiations to conclude the Joint Comprehensive Plan of Action (JCPOA) with Iran. Prior to joining the Administration, Rhodes was a senior speechwriter and foreign policy advisor to the Obama campaign. From 2002–2007, he worked for former Congressman Lee Hamilton, supporting his work on the 9/11 Commission and Iraq Study Group. A native New Yorker, Ben has a BA from Rice University and an MFA from New York University.

For the first 100 days of the new @WhiteHouse @POTUS @VP admin, we @PENamerica put together 8 policy steps the admin can take. One is creation of a task force to fight disinfo, increase media literacy, study racialized efforts to sow division thru hate online. Let’s get to work. https://twitter.com/attorneynora/status/1351582487667904512

Catch up on the latest episodes of #thePENpod at https://bit.ly/39TG7T2. Our most recent Tough Questions segment with @SuzanneNossel examines how free expression defense will change under a Biden administration. LISTEN 🎧 : https://bit.ly/2NxyQ6h.