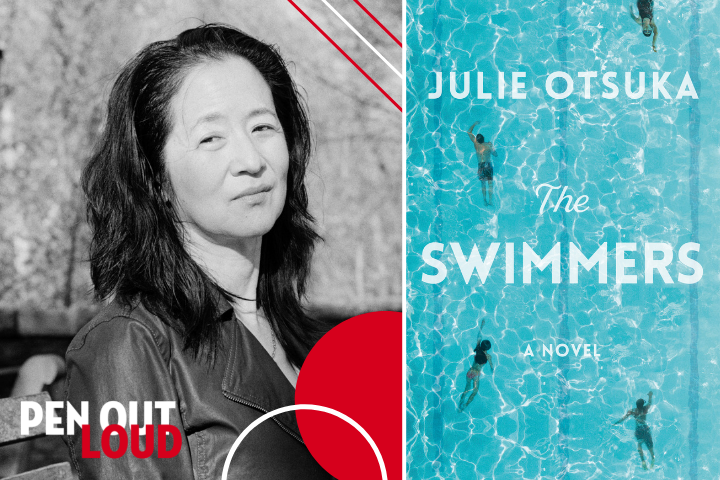 PEN/Faulkner Award-winning novelist Julie Otsuka joins PEN Out Loud and the Asian American Writers’ Workshop to launch her first novel in over a decade, The Swimmers. Turning her attention to a group of recreational swimmers who are disrupted from their routine when a crack appears at the bottom of their pool, the novel explores dislocation, mother and daughter relationships, and the individual and communal consequences of Alzheimer’s disease. Otsuka will be in conversation with author of the memoir All You Can Ever Know and contributing writer and editor at The Atlantic, Nicole Chung.

Julie Otsuka was born and raised in California. She is a recipient of a Guggenheim Fellowship, and her first novel, When the Emperor Was Divine, won the 2003 Asian American Literary Award and the 2003 American Library Association’s Alex Award. Her second novel, The Buddha in the Attic, was a finalist for the National Book Award in 2011 and won the 2012 PEN/Faulkner Award for Fiction and the 2011 Langum Sr. Prize in American Historical Fiction. The Buddha in the Attic was an international bestseller and the winner of the prestigious Prix Femina étranger in 2012, and the Albatros Literaturpreis in 2013. She lives in New York City. Photo Credit: Jean-Luc Bertini

Nicole Chung is the author of the national bestseller All You Can Ever Know. Named a Best Book of the Year by The Washington Post, NPR, The Boston Globe, TIME, Library Journal, and many other outlets, All You Can Ever Know was a finalist for the National Book Critics Circle Award, a semifinalist for the PEN Open Book Award, an Indies Choice Honor Book, and an official Junior Library Guild selection. In 2021, Chung was named to the Good Morning America AAPI Inspiration List honoring those “making Asian American history right now.” She is a contributing writer and editor at The Atlantic, and her work has also appeared in The New York Times, The New York Times Magazine, GQ, The Guardian, and many other publications. Her next two books are forthcoming from Ecco/HarperCollins and HarperTeen. Photo Credit: Emma M. Pollock

About the Asian American Writers’ Workshop

The Asian American Writers’ Workshop (AAWW) is a national literary nonprofit dedicated to publishing and incubating work by Asian and Asian diasporic writers, poets, and artists. Since our founding in 1991, we have provided a countercultural literary arts space at the intersection of migration, race, and social justice.