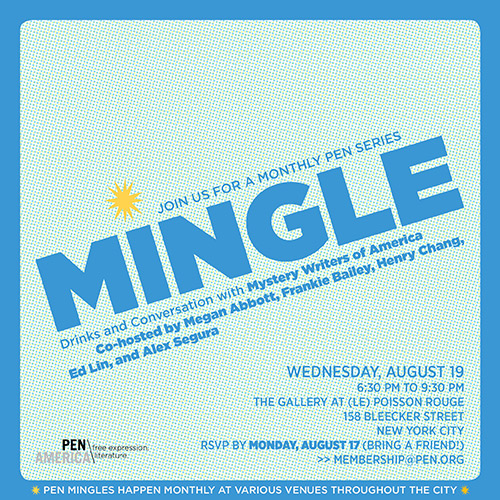 PEN American Center is thrilled to co-host our August PEN Mingle with Mystery Writers of America. PEN Mingles are social gatherings hosted at venues throughout the city. We hope you can join us for an evening of drinks, engaging conversation, and updates on PEN’s work defending free expression at home and abroad.

This is a FREE event but reservations are required by Monday, August 17th.

Please RSVP your attendance here or via membership@pen.org

Mystery Writers of America is the oldest and most prominent organization for writers of crime fiction and other professionals in the field. MWA presents the prestigious Edgar® Awards each year to the most deserving works in the mystery field. The organization also monitors legal developments affecting writers and promotes networking and professional development. MWA-NY is a regional chapter that includes Connecticut, Delaware, New Jersey, New York, Pennsylvania, and West Virginia.

Megan Abbott is the Edgar® award-winning author of seven novels, including Dare Me, The End of Everything and her latest, The Fever, which won both the International Thriller Writers and Strand Critics Award for Best Novel and was chosen one of the Best Books of the Year by Amazon, National Public Radio, the Boston Globe and the Los Angeles Times. Her stories have appeared in anthologies including Detroit Noir, Queens Noir and the Best American Mystery Stories of 2014. She is also the author of The Street Was Mine, a study of hardboiled fiction and film noir. Her next novel, You Will Know Me, comes out in July 2016.

Frankie Y. Bailey is a criminal justice professor at UAlbany (SUNY). She is the 2010 recipient of the George N. Dove Award for her research on mystery and crime fiction. She has been nominated for several other awards, including the Edgar, Agatha, and Anthony, and is the winner of a Macavity Award for African American Mystery Writers (2008). She has five books and two published short stories in a mystery series featuring crime historian Lizzie Stuart. One of the short stories (“In Her Fashion”) was published in 2014 in Ellery Queen Mystery Magazine. The Red Queen Dies (2013) was the first book in a near-future police procedural series featuring Detective Hannah McCabe. The second book in the series, What the Fly Saw, was published this year. Bailey is a former Executive Vice President of Mystery Writers of America and a past president of Sisters in Crime.

Henry Chang is a native son of Chinatown and a lifetime New Yorker. He writes from the world of the urban Chinese immigrant demimonde, and his work has appeared in Murdaland, Gangs in New York’s Chinatown, The NuyorAsian Anthology, and Bridge Magazine. His acclaimed Chinatown series—Chinatown Beat, Year of the Dog, Red Jade, and Death Money, which just came out this April—is a hard-boiled reflection of lifelong experiences in the Chinese community. The books have received high praise from The New York Times Book Review, The Washington Post, and The Boston Globe, among others.

Ed Lin, a native New Yorker of Taiwanese and Chinese descent, is the first author to win three Asian American Literary Awards. His latest book, Ghost Month, a Taipei-based mystery, was published by Soho Crime in 2014. He lives in Brooklyn with his wife, actress Cindy Cheung, and son.

Alex Segura is a novelist and comic book writer. He is the author of the Miami crime novel Silent City, the first in a series featuring Pete Fernandez. Silent City and its sequel, Down the Darkest Street, will be out in 2016. He has also written a number of comic books, including the best-selling and critically acclaimed Archie Meets Kiss storyline, “Occupy Riverdale,” and the upcoming Archie Meets Ramones. He lives in New York with his wife. He is a Miami native.