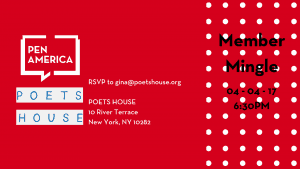 Mingle with PEN America and Poets House on April 4 2017  in celebration of poetry and freedom of expression. Join Poets House workshop leaders, Jay Deshpande, Megan Fernandes, Paolo Javier, and Elaine Sexton for an evening of drinks and engaging conversation.

Jay Deshpande
is the author of Love the Stranger (YesYes Books), named one of the top debuts of 2015 by Poets & Writers. His poems have appeared in Boston Review, Sixth Finch, Blunderbuss, Atlas Review, Forklift Ohio, Handsome, and elsewhere. Essays have been published in Slate, The New Republic, The Millions, and Jacket 2. A winner of the Scotti Merrill Memorial Award and Narrative’s Annual Poetry Contest, he lives in Brooklyn.

Megan Fernandes is an Assistant Professor of English at Lafayette College and teaches courses on poetry, feminist theory, and science and technology studies. She is the author of The Kingdom and After (Tightrope Books 2015), the poetry editor of the anthology Strangers in Paris (Tightrope Books 2011), and the author of two poetry chapbooks: Organ Speech (Corrupt Press) and Some Citrus Makes Me Blue (Dancing Girl Press).

Paolo Javier collections of poetry include The Feeling Is Actual (2011); 60 lv bo(e)mbs (2005); the time at the end of this writing (2004), recipient of a Small Press Traffic Book of the Year Award; and Court of the Dragon (2015), which Publisher’s Weekly called “a linguistic time machine.” He is the recipient of grants and fellowships from the Queens Council on the Arts and the New York State Council on the Arts. For more than ten years, he edited and published the experimental art and poetry journal 2nd Avenue Poetry. From 2010–2014, Javier was poet laureate of Queens, New York.

Elaine Sexton  is the author of three books: Sleuth, Causeway, and Prospect/Refuge.  Her poems, art reviews, book reviews, and works in visual art have appeared in journals and anthologies, textbooks and websites including American Poetry Review, Art in America, Poetry, O! the Oprah Magazine, and Poetry Daily. An avid book maker and micro-publisher, she has curated many site-specific events with accompanying limited-edition chapbooks, among them Hair and 2 Horatio.