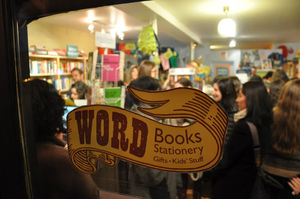 Join PEN Members Jonathan Dee, Jennifer Gilmore, Ben Greenman, Leigh Newman, and Joan Silber for a joint reading and signing at one of the best indy bookstore in NYC, WORD bookstore in Greenpoint.

Jonathan Dee is the author of six novels, including A Thousand Pardons, Palladio, and The Privileges, which was a finalist for the 2010 Pulitzer Prize and winner of the 2011 Prix Fitzgerald and the St. Francis College Literary Prize. He is a contributing writer for The New York Times Magazine, a National Magazine Award-nominated literary critic for Harper’s, a former senior editor of The Paris Review, and the recipient of fellowships from the National Endowment for the Arts and the Guggenheim Foundation.

Ben Greenman is an editor at the New Yorker and the author of several acclaimed books of fiction, including Superbad, Please Step Back, and What He’s Poised to Do. His newest book is The Slippage, a novel.

Leigh Newman is the author of the memoir Still Points North: One Alaskan Childhood, One Grown Up World, On Long Journey Home. Her stories and essays have appeared in One Story, Tin House, Fiction, New York Tyrant, the New York Times Modern Love column, Vogue, and Bookforum. She is the deputy editor and books editor of Oprah.com, and an editor-at-large for the indie press Black Balloon Publishing.

Joan Silber has published six books of fiction: Household Words, which won the PEN/Hemingway Award, In the City, In My Other Life, Lucky Us, Ideas of Heaven: A Ring of Stories, finalist for the National Book Award and the Story Prize, and The Size of the World, finalist for the Los Angeles Times Prize in Fiction and one of the Seattle Times’ ten best books of fiction of 2008. Her newest book is a collection of short stories called Fools.