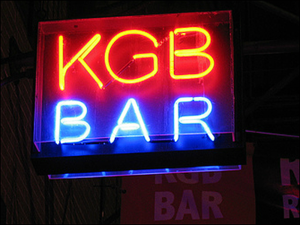 Join PEN American Center staff and members for drinks, readings, and conversation at the venerable KGB Bar in the East Village for one of the longest-running reading series in NYC. This evening will feature new PEN members reading from recent works and forthcoming novels.

Marie-Helene Bertino‘s debut novel 2 A.M. at the Cat’s Pajamas will be published in August 2014 by Crown. Her debut collection of short stories Safe as Houses received the 2012 Iowa Short Fiction Award, the Pushcart Prize, and was long-listed for the Story Prize and the Frank O’Connor International Short Story Prize. She was an Emerging Writers Fellow at New York City’s Center for Fiction and teaches at NYU, The Center for Fiction, and The Sackett Street Workshops. She lives in Brooklyn, where she was the Associate Editor for One Story and where she is cold, she is probably cold now even as you’re reading this, because she’s always cold. For more information, visit www.mariehelenebertino.com.

Dina Nayeri’s debut novel, A Teaspoon of Earth and Sea, was released in 2013 by Riverhead Book and translated into 14 foreign languages. Her work is published in over 20 countries and has been recognized by Barnes and Noble Discover Great New Writers, Best American Short Stories, Best American Non-required Reading, Granta New Voices, and The Center for Fiction (Flaherty Dunnan prize long list). Her stories and essays have also appeared in Marie Claire, Glamour, Salon, Guernica, The Southern Review, Alaska Quarterly Review, and elsewhere. She holds an MBA and a Master of Education, both from Harvard, and a BA from Princeton. She has worked in high fashion, management consulting, university admissions, investment banking, and once as a grumpy lifeguard. Now, having completed her MFA at the Iowa Writers Workshop where she was a Truman Capote Fellow and Teaching Writing Fellow, Dina is at work on her second novel (also about an Iranian family). She lives in New York.

Paul Rome is a writer, performer, and coffee shop manager. He has written for The Huffington Post, PEN America, The Minetta Review, and Mercer Street. His literary performances have been described by The Faster Times as “writing that dazzles” and by Hyperallergic as “striking… measured sentences” that “captivate and immerse the auditory cortex.” Rome’s debut novel, We All Sleep in the Same Room, was hailed by The Barnes & Noble Review as “a taut and stylistically vanguard legal drama” and by Electric Literature as “a New York novel… all the more memorable for its originality.”