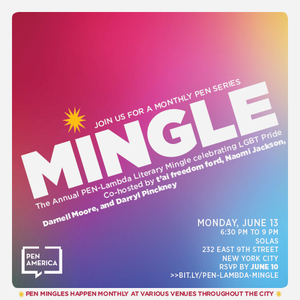 PEN America is delighted to announce our annual June mingle with Lambda Literary in honor of LGBT Pride! PEN Mingles are social gatherings hosted at various venues throughout NYC. We hope you are able to join us for an evening of drinks, engaging conversation, and updates on PEN’s work defending free expression and Lambda’s work with LGBT writers. 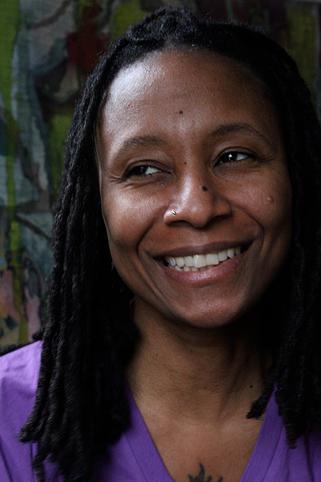 t’ai freedom ford is a New York City high school English teacher and Cave Canem Fellow. She received her MFA in Fiction from Brooklyn College. Her fiction has appeared or is forthcoming in Black Ivy, The Brooklyn Review, Bronx Biannual and Kweli. Her poetry has appeared or is forthcoming in Drunken Boat, Sinister Wisdom, No, Dear, The African American Review, Vinyl, Muzzle, Poetry and others. Her work has also been featured in several anthologies including The BreakBeat Poets: New American Poetry in the Age of Hip-Hop. In 2012 and 2013, she completed two multi-city tours as a part of a queer women of color literary salon, The Revival. In 2014, she was the winner of The Feminist Wire’s inaugural poetry contest judged by Evie Shocklee. She is a 2015 Center for Fiction Fellow and the Poetry Project’s 2016 Emerge-Surface-Be Poetry fellow. Winner of the 2015 To the Lighthouse Poetry Prize, her first poetry collection, “how to get over” is forthcoming Spring 2017 from Red Hen Press. t’ai lives and loves in Brooklyn, but hangs out digitally at: shesaidword.com 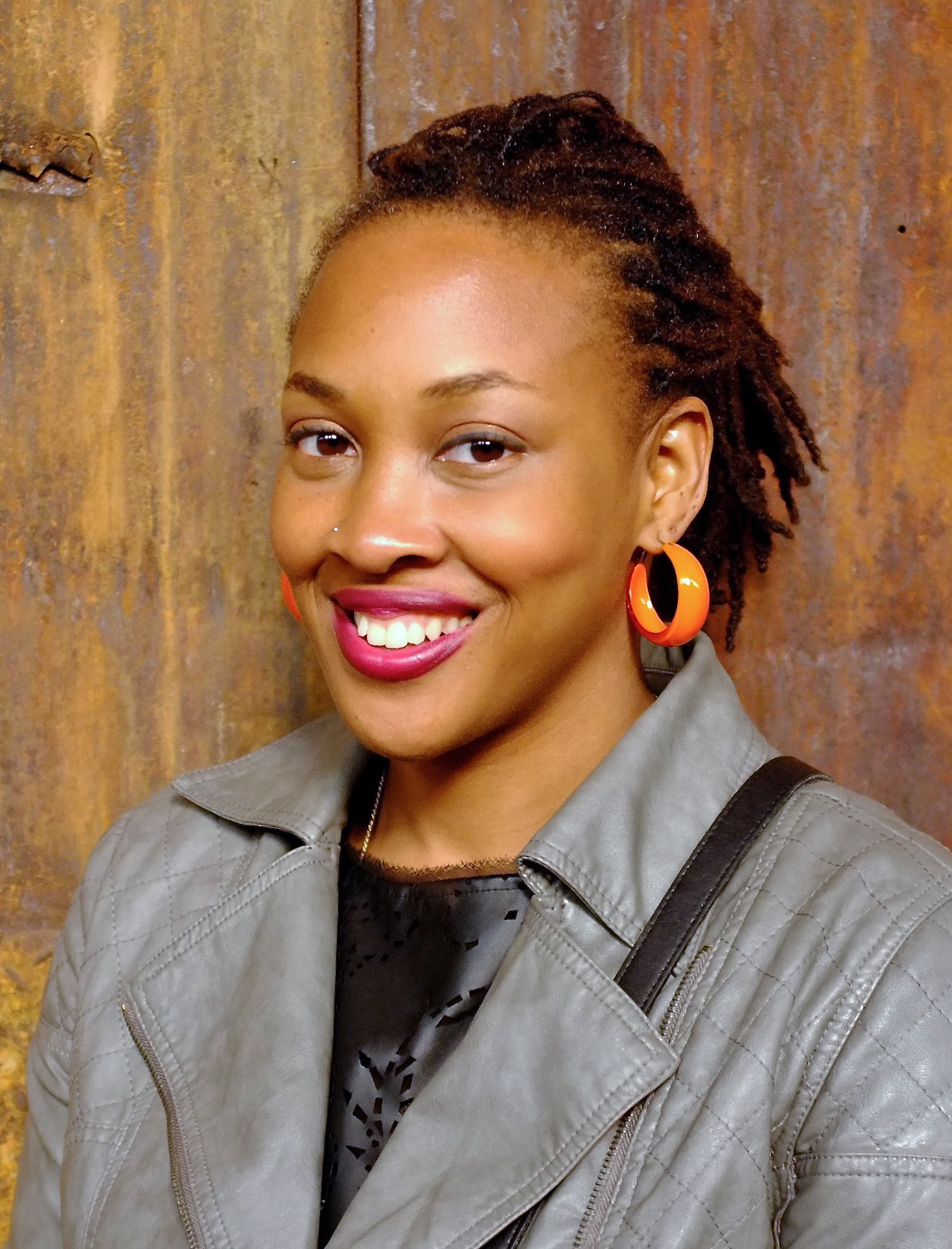 Naomi Jackson is the author of The Star Side of Bird Hill, which was nominated for an NAACP Image Award and longlisted for the National Book Critics Circle’s John Leonard Prize as well as the Center for Fiction’s First Novel Prize. Jackson studied fiction at the Iowa Writers’ Workshop. She traveled to South Africa on a Fulbright scholarship, where she received an M.A. in Creative Writing from the University of Cape Town. A graduate of Williams College, her work has appeared in literary journals and magazines in the United States and abroad. She is the recipient of residencies from the University of Pennsylvania’s Kelly Writers House, Hedgebrook, and the Camargo Foundation. Jackson was born and raised in Brooklyn by West Indian parents. 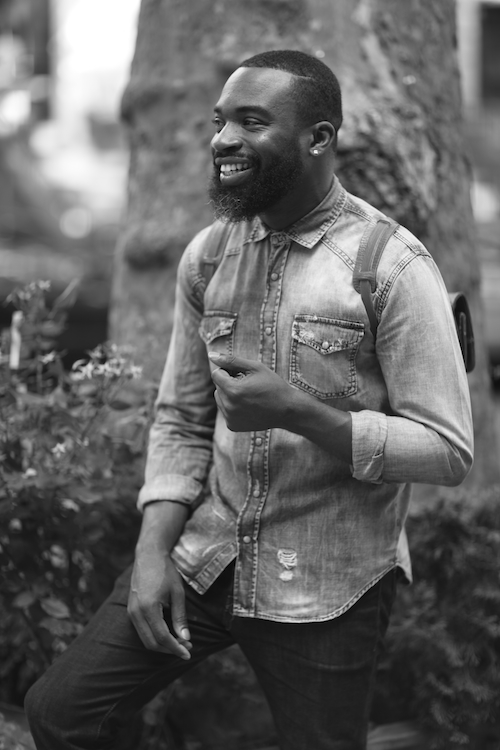 Darnell L. Moore is a Senior Editor and Correspondent at MicNews, Co-Managing/Editor at The Feminist Wire and writer-in-residence at the Center on African American Religion, Sexual Politics and Social Justice at Columbia University.  Along with NFL player Wade Davis II, he co-founded YOU Belong, a social good company focused on the development of diversity initiatives. A prolific writer, Darnell has been published in various media outlets including MSNBC, The Guardian, Huffington Post, EBONY, The Advocate, OUT Magazine, Gawker, Truth Out, VICE, Guernica, Mondoweiss, Thought Catalog, Good Men Project and others, as well as numerous academic journals including QED: A Journal in GLBTQ World Making, Women Studies Quarterly, Ada: A Journal of Gender, New Media & Technology, Transforming Anthropology, Black Theology: An International Journal, and Harvard Journal of African American Policy, among others. He also edited the art book Nicolaus Schmidt: Astor Place, Broadway, New York: A Universe of Hairdressers (Kerber Verlag) and has published essays in several edited books. 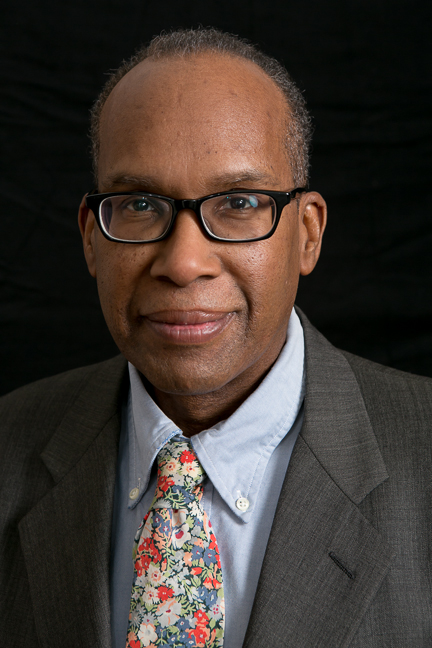 Darryl Pinckney, a long time contributor to The New York Review of Books, is the author of two works of fiction, High Cotton and Black Deutschland, and two works of non fiction, Out There: Mavericks of Black Literature and Blackballed: The Black Vote and US Democracy. He has also worked for the Robert Wilson productions of The Forest, Orlando, Time Rocker, The Old Woman, Letter to A Man, and, most recently, Garrincha: An Opera of the Streets.