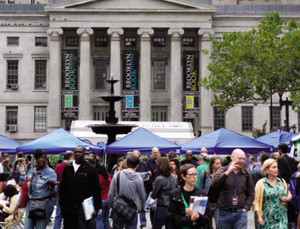 We’ll be at booth #44 all day, just steps from the Main Stage at the base of Brooklyn Borough Hall. Swing by our booth to get the latest news about PEN’s advocacy campaigns, PEN.org literary features, and the PEN America journal. PEN Member Lauren Cerand will be fielding and asking questions between 2-4pm as part of her PEN Ten web Interview series. Stop by for an interview and we’ll Tumbl your photo with a quote.

SPECIAL OFFER: This weekend only, join PEN or renew your membership in person and receive a special Festival discount. New and returning members will also receive a complimentary copy of the PEN/O. Henry Prize Stories collection.

Be sure to catch PEN’s panel at 5pm Sunday, “Something to Hide: Writers Against the Surveillance State,” with André Aciman, Edwidge Danticat, Thomas Drake, Nick Flynn, Leonard Lopate, and Francine Prose. Full info can be found here.

From start to finish, PEN has this year’s Brooklyn Book Festival covered.

For this week's #PENTen, we spoke with @jessaminechan about her dystopian debut novel THE SCHOOL FOR GOOD MOTHERS, including how the book navigates truth, why she explores the morality and subjectivity of motherhood, and more: https://bit.ly/3Haku2i.