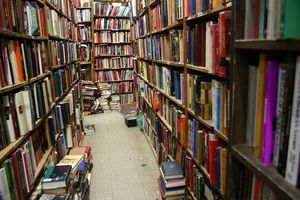 Will you be at AWP 2016? If so, be sure to stop by PEN’s booth (#629) to renew your membership with a special discount, meet PEN staff, and receive updates on our ongoing literary and advocacy work.

At 3pm on Thursday, March 31, PEN will present a program entitled “Literary Awards and Prizes: Help or Hindrance?” with Saeed Jones, Arna Bontemps Hemenway, Jennine Capó Crucet, and Kirstin Valdez Quade. The panel will be moderated by Paul Morris, Director of Literary Programs at PEN. More information on the program and panelists below.

Saeed Jones’ debut poetry collection Prelude To Bruise (Coffee House Press) was the winner of the 2015 PEN/Joyce Osterweil Award For Poetry and the 2015 Stonewall Book Award/Barbara Gittings Literature Award and a finalist for the 2015 National Book Critics Circle Award. The book was also a finalist for 2015 awards from the Lambda Literary and the Publishing Triangle. His poetry and essays have appeared in publications like the New York Times, NPR, Guernica, Ebony, and The Rumpus, among others. Saeed won a Pushcart Prize for poetry in 2013 and is BuzzFeed’s Executive Editor of Culture.

Arna Bontemps Hemenway is the author of Elegy on Kinderklavier (Sarabande Books), winner of the 2015 PEN/Hemingway Award and finalist for the Barnes and Noble Discover Award. His short fiction has appeared in or is forthcoming from Best American Short Stories 2015, A Public Space, Ecotone, Five Chapters, and The Missouri Review, among other venues. He’s been the recipient of scholarships and fellowships from the Bread Loaf Writers’ Conference, the Sewanee Writers’ Conference, and the Truman Capote Literary Trust. He holds an M.F.A. from the Iowa Writers’ Workshop, and is currently Assistant Professor of English in Creative Writing at Baylor University.

Jennine Capó Crucet is the author of the novel Make Your Home Among Strangers (St. Martin’s Press, 2015) and the story collection, How to Leave Hialeah. The recipient of the Iowa Short Fiction Prize, the John Gardner Book Award, and the Devil’s Kitchen Reading Award, her writing has appeared in The New York Times, The Los Angeles Review, Epoch, Prairie Schooner, Ploughshares, and elsewhere. A winner of an O. Henry Prize and the Picador Fellowship, she was raised in Miami and is currently on the faculty of the University of Nebraska’s Creative Writing Program.

Kirstin Valdez Quade is the author of Night at the Fiestas, which was a New York Times Notable Book and won the John Leonard Prize from the National Book Critics Circle, as well as a “5 Under 35” award from the National Book Foundation. She is the recipient of the Rona Jaffe Foundation Writer’s Award and the 2013 Narrative Prize. Her work has appeared in The New Yorker, Narrative, Guernica, The Southern Review, The Best American Short Stories, The O. Henry Prize Stories, and elsewhere. She has received fellowships from Yaddo and the MacDowell Colony, as well as a grant from the Elizabeth George Foundation. She was a Wallace Stegner at Stanford University, where she also taught as a Jones Lecturer. She’s been on the faculty in the M.F.A. programs at University of Michigan and Warren Wilson. In fall 2016, she will be an assistant professor at Princeton University.