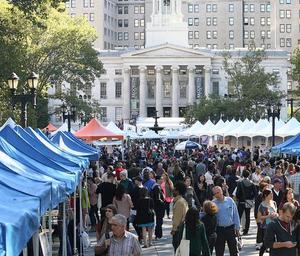 Get ready, book lovers! PEN is excited to be a Programming Partner for the Tenth Annual Brooklyn Book Festival on Sunday, September 20. Over 40 PEN Members are participating in a variety of talks, readings, and special events throughout the day (see below for the full list). We hope to see you there.

Stop by PEN’s Booth #202 to hear about PEN’s recent campaigns in Mexico, Nigeria, and Azerbaijan, learn about our Writers in the School and Prison Writing Mentoring programs, and speak with staff about our special upcoming Banned Books Week feature. Copies of our chapbooks and the PEN America journal will also be on sale.

SPECIAL OFFER*: Renew your membership in person or sign up to become a new Member and you’ll receive a 20% discount on your annual dues. Students get 50% off.

This year PEN will host two panel discussions at the Brooklyn Book Festival:

The past year has seen a remarkable rise in the number of books challenged as being inappropriate reading for children and young adults. Across America, critics have tried to remove books from library shelves and school reading lists-books that deal with aspects of life that they think your kids shouldn’t know. Bestselling and critically acclaimed authors Matt de La Peña, Libba Bray, Robie Harris, and Christopher Myers will read the words that some people say are unfit for children. Come and judge for yourself if they contain ideas too dangerous for today’s youth.

Translating Books for Youth presented by the PEN American Center

PEN Members participating in this year’s Festival include:

*If you are unable to attend, you can take part in this offer by emailing membership@pen.org