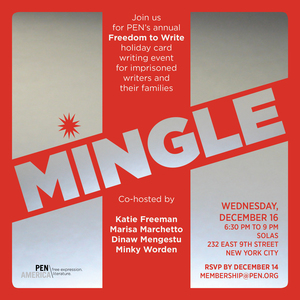 A year-end celebration of words and camaraderie. Come raise a glass with fellow writers, editors, and the literary community at large. Send a message of support to imprisoned writers and their families around the world.

This is a free event, but reservations are required. Please RSVP by Monday December 14 to membership@pen.org.

*Can’t make it to the Mingle? You can be part of PEN’s most honored tradition from anywhere in the world. Send a note of solidarity to a jailed writer using our online form.

Katie Freeman is the Associate Director of Publicity for Riverhead Books, where she works with authors including James McBride, Anne Lamott, Mohsin Hamid and Tiphanie Yanique. A member of the AAP’s International Freedom to Publish committee, she also on advisory committees for Narrative4 and the National Book Foundation. Originally from Iowa, she lives in Brooklyn.

Marisa Marchetto is a cartoonist for The New Yorker whose work has appeared in The New York Times; Glamour; and O, The Oprah Magazine, among other publications. She is the author of the groundbreaking graphic memoir Cancer Vixen, published by Knopf in 2006 and by Pantheon in paperback in 2009. Cancer Vixen was named one of Time magazine’s top ten graphic memoirs and was a finalist for the National Cartoonists Society Graphic Novel of the Year. Her most recent book is the graphic novel Ann Tenna, published by Knopf in September of this year. Marchetto is the founder and chair of the Marisa Acocella Marchetto Foundation at Mt. Sinai Beth Israel Comprehensive Cancer Center and the Dubin Breast Center at Mt Sinai. She lives in New York City.

Dinaw Mengestu came to the U.S. with his family from Ethiopia at the age of two. He has published three novels, all of them New York Times Notable Books, including his most recent, All Our Names. A 2012 MacArthur Foundation Fellow, Mengestu also earned a 2007 National Book Foundation “5 Under 35” Award and was included on The New Yorker’s “20 under 40” list in 2010. Also a freelance journalist who has reported from sub-Saharan Africa about life in Darfur, northern Uganda, and eastern Congo, Mengestu has had his work published in Harper’s, Granta, Rolling Stone, The New Yorker, and The Wall Street Journal.

Minky Worden is Human Rights Watch’s Director of Global Initiatives. As Human Rights Watch’s Director of Global Initiatives, she develops and implements international outreach and advocacy campaigns. She previously served as Human Rights Watch’s Media Director, working with the world’s journalists to help them cover crises, wars, human rights abuses and political developments in some 90 countries worldwide. Before joining Human Rights Watch in 1998, Ms. Worden lived and worked in Hong Kong as an adviser to Democratic Party chairman Martin Lee and worked at the Department of Justice in Washington, D.C. as a speechwriter for the U.S. Attorney General and in the Executive Office for US Attorneys. A member of the Council on Foreign Relations, Ms. Worden speaks Cantonese and German, and is an elected member of the Overseas Press Club’s Board of Governors. She is the editor of The Unfinished Revolution (Seven Stories Press, 2012) and China’s Great Leap (Seven Stories Press, 2008), and the co-editor of Torture (New Press, 2005).