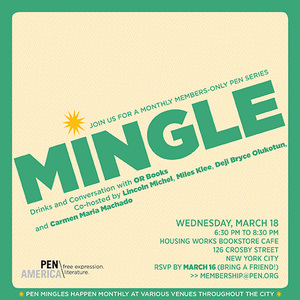 Join PEN and co-host OR Books for drinks and engaging conversation, and get updates on PEN’s free expression work. With OR co-founder John Oakes, as well as PEN Members and contributors to OR’s upcoming Watchlist surveillance anthology:

Beer and wine will be served, free drinks to the first 50 attendees and drink specials after that.

Sign up to become a PEN Member or renew your Membership at the event and receive a 20% discount. www.pen.org/join

This is a free event but reservations are required. Please RSVP by Monday, March 16 to membership@pen.org

Lincoln Michel is the online editor of Electric Literature and the co-editor of Gigantic. His writing appears in Tin House, VICE, NOON, Buzzfeed, The Believer, and elsewhere. His debut collection, Upright Beasts, is forthcoming from Coffee House Press. He tweets at @thelincoln and sometimes draws famous authors as monsters.

Miles Klee, a reporter for the Daily Dot, is author of the novel Ivyland, a finalist in the 2013 Tournament of Books, as well as a forthcoming short story collection, True/False. His essays, satire, and fiction have appeared in Vanity Fair, Lapham’s Quarterly, The Millions, Unstuck, The Collagist, Contrary,The White Review, and elsewhere.

Deji Bryce Olukotun is the author of Nigerians in Space, a novel out now from Unnamed Press. His work has been published in VICE, Slate, The Millions, and other publications. He is an attorney who fights for digital rights at the organization Access.

Carmen Maria Machado is a fiction writer, critic, and essayist whose work has appeared in The New Yorker, The Paris Review, Granta, AGNI, NPR, Los Angeles Review of Books, and VICE, and has been reprinted in several anthologies, including Year’s Best Weird Fiction and Best Women’s Erotica. She was a recipient of the Richard Yates Short Story Prize in 2011, a Millay Colony for the Arts residency in 2014, a Nebula Award nomination in 2015, and is the current CINTAS Foundation Fellow. She is a graduate of the Iowa Writers’ Workshop and the Clarion Science Fiction & Fantasy Writers’ Workshop, and lives in Philadelphia with her partner.