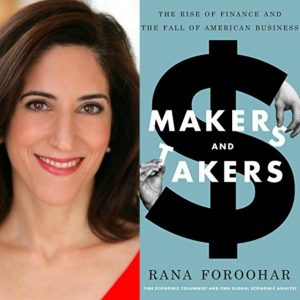 You are invited to a private dinner with journalist and author Rana Foroohar.

The dinner will be hosted by Suzy and Sadek Wahba at their Upper East on Thursday, February 2nd at 7:30pm.

Rana will discuss her latest book, Makers and Takers: The Rise of Finance and the Fall of American Business, in which she shows how the “financialization of America” – the trend by which finance and its way of thinking have come to perpetuate Wall Street’s reign over Main Street, widening the gap between rich and poor, and threatening the future of the American Dream. Nobel Laureate Joseph E. Stiglitz says Makers and Takers “demystifies the decline in America’s economic prominence,” and that in it, Faroohar “explains how finance has permeated every aspect of our economic and political life, and how those who caused the financial crisis wound up benefiting from it.”

Rana Foroohar was recently named global business columnist for the Financial Times, as well as Associate Editor. She will take up her post on 1 March, 2017. She is also CNN’s global economic analyst. Prior to joining the FT and CNN, Foroohar was for six years the assistant managing editor in charge of business and economics at Time, as well as the magazine’s economic columnist. She also spent 13 years at Newsweek, as an economic and foreign affairs editor and a foreign correspondent covering Europe and the Middle East. During that time, she was awarded the German Marshall Fund’s Peter Weitz Prize for transatlantic reporting.