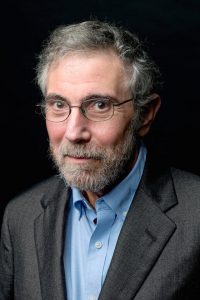 You are invited to a private dinner with Nobel Prize-winning economist Paul Krugman.

The dinner will be hosted by Denise Simon and Paulo Viera da Cunha on Thursday, March 16th at their home on West 57th Street at 7:30pm.

Paul will discuss some of his recent writings which have focused on American politics and economic policy in the wake of the 2016 Election.

Paul Krugman is the author or editor of 23 books and more than 200 professional journal articles, many of them on international trade and finance. In recognition of his work, he received the Nobel Prize in Ecomonic Sciences and the John Bates Clark Medal from the American Economic Association, an award given every two years to the top economist under the age of 40.  He joined The New York Times in 1999 as a columnist on the Op-Ed Page and continues as professor of Economics and International Affairs at Princeton University. His current academic research is focused on economic and currency crises.