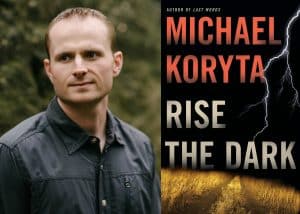 We’re Sorry, this dinner has been SOLD OUT

You are invited to a private dinner with writer Michael Koryta.

The dinner will be hosted by Roxanne Donovan and Tom Scarangello in their Upper East Side home on Tuesday, March 7th, 2017 at 7:00 pm.

Michael will discuss his latest novel, Rise the Dark, a continuation of the Mark Novak saga. In Red Lodge, Montana, a senseless act of vandalism shuts the lights off in the town where Sabrina Baldwin is still trying to adjust to a new home and mourning the loss of her brother, who was a high voltage linesman just like her husband, Jay. As the spring’s final snowstorm calls Jay deeper into the mountains, chasing the destruction on the electrical grid, Sabrina is abducted by Garland Webb, the man Markus Novak believes killed his wife. Drawing them all together is a messianic villain who understands that you can never outpace your past. You can only rise against the future.

Praise for Rise the Dark: “This book arrived with high praise from several stars of the genre–‘A master,’ says Stephen King; ‘Outstanding,’ adds Lee Child–and they’re right. Rise the Dark is both first-rate entertainment and an unusually interesting thriller in terms of its characters, its plot and the ideas it explores, which include the electrical grid, Tesla’s history, spiritualism, and the nation’s possible vulnerability to a right-wing takeover.” —The Washington Post

Michael Koryta is the New York Times bestselling author of ten novels, most recently Those Who Wish Me Dead and Last Words. His previous novels–including The Prophet, The Ridge, and So Cold The River–were New York Times notable books, national bestsellers, and have been nominated for numerous awards, including having won the Los Angeles Times Book Prize. A former private investigator and newspaper reporter, Koryta graduated from Indiana University with a degree in criminal justice.

We’re Sorry, this dinner has been SOLD OUT