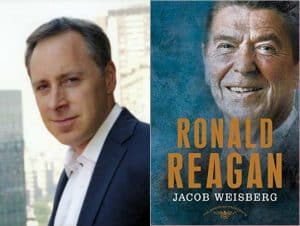 You are invited to a private dinner with writer Jacob Weisberg.

The dinner will be hosted by Anne Hess and Craig Kaplan and will take place at their Gramercy Park home on Wednesday, March 15th, 2017 at 7:30 pm.

Jacob will discuss his latest book, Ronald Reagan: The American Presidents Series: The 40th President, 1981-1989 and take part in a discussion about the impact of the Reagan Presidency on the shape of the current political climate, agenda and the 2016 U.S. Presidential Election.

Praise for Ronald Reagan: The American Presidents Series: The 40th President, 1981-1989: “Weisberg takes his historical duties seriously, laying out Reagan’s actions with an admirable lack of pop psychology. . . . This concise biography makes a good case that Reagan was the second most important president of the 20th century after Franklin Roosevelt.” —Kirkus Reviews

Jacob Weisberg is a political journalist, serving as chairman and editor-in-chief of The Slate Group; he served as the former editor of Slate magazine. Weisberg is the author of The Bush Tragedy and is the creator of the “Bushisms” book series. He previously worked for The New Republic and was a contributing writer for The New York Times Magazine, a contributing editor to Vanity Fair, and a columnist for the Financial Times. He lives in New York City.