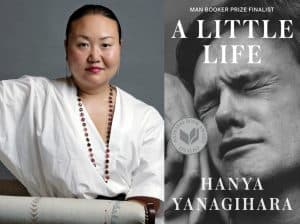 You are invited to a private dinner with writer Hanya Yanagihara.

The dinner will be hosted by Linzee Troubh in Park Slope, Brooklyn on Wednesday, March 1st, 2017 at 7:30 pm., and has been designed to cultivate a younger professional audience for Authors’ Evenings.

Hanya will discuss her book A Little Life, which follows four college classmates—broke, adrift, and buoyed only by their friendship and ambition—as they move to New York in search of fame and fortune. While their relationships, which are tinged by addiction, success, and pride, deepen over the decades, the men are held together by their devotion to the brilliant, enigmatic Jude, a man scarred by an unspeakable childhood trauma. A hymn to brotherly bonds and a masterful depiction of love in the twenty-first century, her stunning novel is about the families we are born into, and those that we make for ourselves.

Praise for A Little Life: “An epic study of trauma and friendship written with such intelligence and depth of perception that it will be one of the benchmarks against which all other novels that broach those subjects… will be measured. A Little Life announces [Yanagihara] as a major American novelist.” —The Wall Street Journal

Before writing A Little Life, Hanya Yanagihara worked as a publicist until 2007 when she began working for Conde Nast Traveler and became an editor. In 2015, she moved to T: The New York Times Style Magazine as a deputy editor. Her first novel, The People in the Trees, based on the real-life case of the virologist Daniel Carleton Gajdusek, was praised as one of the best novels of 2013. A Little Life was shortlisted for the 2015 Man Booker Prize for Fiction and was a finalist for the 2015 National Book Award in Fiction.