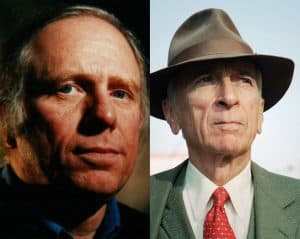 You are invited to a private dinner with Gay Talese and Ian Frazier.

The dinner will be co-hosted by Jackie Weld and Jeannette Watson Sanger in Jackie’s Park Avenue home on Tuesday, January 24th, 2017 at 7:30pm.

Gay’s newest collection, High Notes, takes its name from his 2011 New Yorker account of a revealing studio session with avant-pop star Lady Gaga and old-school crooner Tony Bennett, and draws from six decades of Gay’s work–from his long-form pieces for Esquire to his more autobiographical writings of the eighties and nineties to his twenty-first century reflections on New York, New Yorkers, and the institution of which he is the longtime chronicler, the New York Times.

Ian’s newest work is Hogs Wild, an assembly of a decade’s worth of his finest essays and reportage, which demonstrates the irrepressible passions and artful digressions that distinguish his enduring body of work. Part muckraker, part adventurer, and part raconteur, Frazier beholds, captures, and occasionally reimagines the spirit of the American experience. In each dizzying discovery, Hogs Wild unearths the joys of inquiry without agenda,  of curiosity without calculation.

Gay Talese is a bestselling author who has written fourteen books, including The Voyeur’s Hotel, A Writer’s Life, Unto the Sons, Thy Neighbor’s Wife, Honor Thy Father, The Kingdom and the Power, and The Bridge: The Building of the Verrazano-Narrows Bridge. He was a reporter for the New York Times from 1956 to 1965, and since then he has written for the The New Yorker, Esquire, and other national publications.

Ian Frazier is the author of eleven books, including Travels in Siberia, Great Plains, On the Rez, Lamentations of the Father, and Coyote V. Acme. He has been a frequent contributor to The New Yorker since 1974.