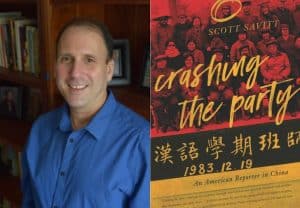 You are invited to a private dinner with journalist and author Scott Savitt.

The dinner will be co-hosted by Ned and Jordana Baldwin along with Danielle Truscott and Andy Kaufman on February 13th at 7:30pm and will take place at the Baldwins’ restaurant, Houseman, on Greenwich Street.

Scott will discuss his recent book, Crashing the Party: An American Reporter in China, a memoir about his two decades in China, which manages to take an extremely complex political-historical subject and turn it into a story of high adventure. Dan Southerland, Executive Editor at ‘Radio Free Asia’ and Washington Post Beijing bureau chief from 1986-1990, says “Savitt has immersed himself in China’s history and culture, enriching his story with hard-earned wisdom and insights. He takes us on an exciting ride through his 18 years in China–from the country’s first opening to American students and then on to Tiananmen and his solitary confinement in a Chinese jail. This book should appeal both to those who know China well and those who are just discovering it.”

Scott Savitt is the in-house Chinese-English translator for numerous human rights organizations and The New York Times. His articles have been published in the Los Angeles Times, Washington Post, Wall Street Journal, The New York Times and many other newspapers and magazines. He is a former visiting scholar at Duke University.