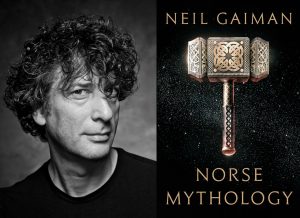 You are invited to a private dinner with New York Times bestselling author Neil Gaiman, who is the recipient of numerous U.S. and international literary awards.

The dinner will be hosted by Andrew Solomon and John Habich Solomon at their Greenwich Village home on Friday, February 10th at 7:30p.m.

Neil will discuss Norse Mythology, his newest work, in which he fashions primeval stories into a novelistic arc that begins with the genesis of the legendary nine worlds; delves into the exploits of the deities, dwarves, and giants; and culminates in Ragnarok, the twilight of the gods and the rebirth of a new time and people. Gaiman stays true to the myths while vividly reincarnating Odin, the highest of the high, wise, daring, and cunning; Thor, Odin’s son, incredibly strong yet not the wisest of gods; and Loki, the son of giants, a trickster and unsurpassable manipulator. Maria Tatar, the chair of Harvard University’s Program in Folklore and Mythology, calls the book “addictive reading for young and old, with high-wattage retellings that preserve the monumental grandeur of the Nordic universe.”

Neil Gaiman is an author of short fiction, novels, comic books, graphic novels, audio theatre, and films. His notable works include the comic book series The Sandman and the novels Stardust, American Gods, Coraline, and The Graveyard Book. He has won numerous awards, including the Hugo, Nebula, and Bram Stoker awards, as well as the Newbery and Carnegie medals. He is the first author to win both the Newbery and the Carnegie medals for the same work, The Graveyard Book.