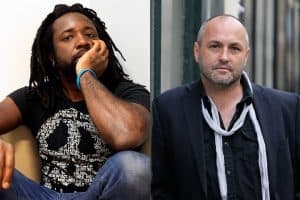 You are invited to a private dinner with writers Marlon James & Colum McCann.

The dinner will be hosted by Jonathan Barton and Amanda Foreman at The Century Association on Tuesday, May 2nd, 2017 at 7:30 pm.

This Author’s Evening is a celebration of their most recent books: A Brief History of Seven Killings (Marlon James), and Letters to a Young Writer: Some Practical and Philosophical Advice (Colum McCann).  The event coincides with their involvement in this year’s PEN America World Voices Festival where Marlon and Colum will participate in the following events: Insistent Tongues: Queer World Voices and United Against Hate.

Colum McCann is the internationally bestselling author of the novels Zoli, Dancer, This Side of Brightness, and Songdogs, as well as two critically acclaimed story collections. His fiction has been published in thirty languages. He has been a finalist for the International IMPAC Dublin Literary Award and was the inaugural winner of the Ireland Fund of Monaco Literary Award in Memory of Princess Grace. He has been named one of Esquire’s “Best and Brightest,” and his short film Everything in This Country Must was nominated for an Oscar in 2005. A contributor to The New Yorker, The New York Times Magazine, The Atlantic Monthly, and The Paris Review, he teaches in the Hunter College MFA Creative Writing Program.